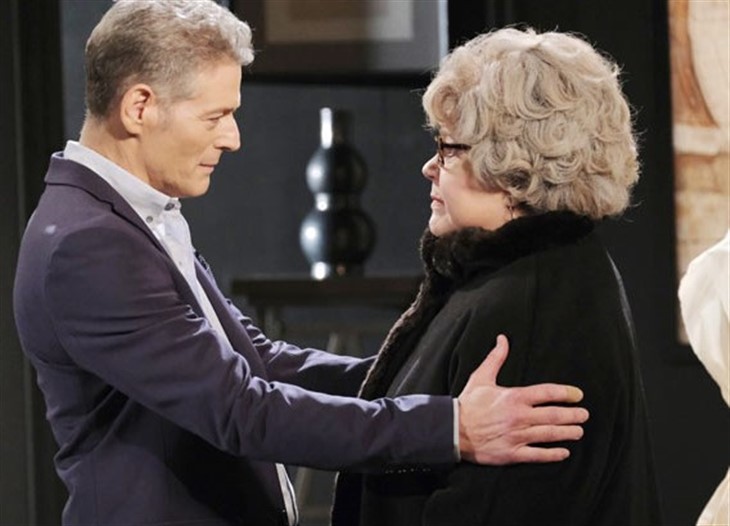 Days of Our Lives spoilers reveal that Craig Wesley (Kevin Spirtas) comes to Salem to smooth things over with Nancy Wesley (Patrika Darbo). Craig insists that he’s not having an affair and the couple makes up. Later, Chloe Lane (Nadia Bjorlin) catches her father telling someone sweet nothings over the phone. However, Craig’s confession is not what Chloe ever expected.

DOOL spoilers reveal that Nancy arrived in Salem unexpectedly. Nancy told Chloe and Brady Black (Eric Martsolf) that she thinks Craig is having an affair. Nancy explained that Craig isn’t acting like the man she married. It’s not just Craig’s sneaky and shady behavior, though. It’s not just the crazy expensive meals at restaurants while he’s out of town. Nancy found condoms in Craig’s briefcase.

Craig will arrive in Salem to clear things up with Nancy. Craig also doesn’t want his daughter to think the worst of him. Craig swears up and down that he’s not cheating on Nancy. Eventually, Nancy believes him and they make up. After the couple makes love, though, Craig lays in bed thinking how he’s going to deal with this situation. Spirtas teased to SOD, “He’s laying there staring at the ceiling, and questioning himself, as well, like, ‘How am I doing this?’ He wants to take care of her and comfort her.”

Days of Our Lives spoilers for the week of January 24 reveal that Craig will be on the phone. Chloe just happens to overhear what Craig is saying to the person on the other end. Spirtas explained to Soap Opera Digest that Chloe overhears Craig whispering sweet nothings and knows he’s not talking to Nancy.

“He’s caught. And he comes clean to her. He just can’t lie to this beautiful child.”

However, what Craig confesses isn’t what Chloe expects. So, if this affair isn’t another woman, then could it be another man? What could be so shocking that it makes Chloe’s jaw drop to the floor? Some viewers believe that Craig might be gay and if that’s the case, how will he tell Nancy? Is this something he’s always known and has lied to Nancy about it for 35 years? Or is this a new discovery?

What do you think Craig’s secret is and who is he whispering sweet nothings to? What is it about Craig’s confession that stuns Chloe? It can’t be simply another woman as Chloe would be expecting that, especially after overhearing his phone call. So, there is more to the story. Share your thoughts and remember to keep watching the NBC soap to see what happens next.