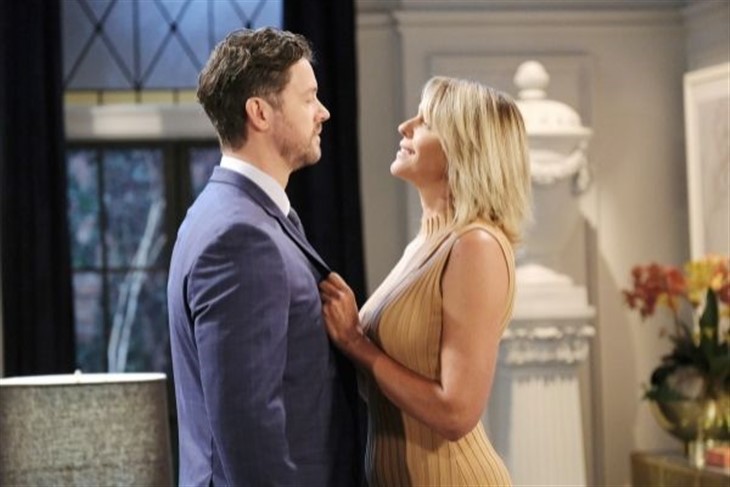 Undoubtedly, it won’t take much of a push for Nicole to push EJ and Belle together – but EJ has to make an effort at least, and he’s hesitant. EJ and Belle have been commiserating about Belle’s sad situation, with Jan Spears (Heather Lindell) carrying Shawn Brady’s (Brandon Beemer) baby and milking it for all it’s worth! EJ and Belle are already close and he won’t want to rush her into anything in her obvious pain-unlike he’s treated her sister Sami Brady (Alison Sweeney) at times!

As for Nicole, she’ll have a much different reason for trying to push EJ to take it to the next level with Belle. Sami’s on her way back to Salem and she wants to cause some Sami chaos between her and her sister just because Nicole and Sami are rivals!

Some snoopy someone sees EJ kissing Belle during the week of May 30 and it’ll probably be Nicole since soon afterward she gives him some romantic advice! It’s possible she may want to protect him from pain when he inevitably finds out Sami and Lucas Horton (Bryan Datillo) are now engaged once Sami arrives in Salem. However, Nicole will get some vengeful satisfaction against Nicole as part of the bargain if she can push EJ and Belle together! Viewers will remember that EJ and Nicole were involved a little while back even though they didn’t date for long. Nicole will still feel like Belle’s a better option for EJ than her twisted sister Sami!

Days Of Our Lives Spoilers – Two Birds With One Stone

Nicole may feel like she can kill two birds with one stone by pushing Belle and EJ together, and feel like she’s done her good dead for the day if successful! She can keep EJ from falling into Sami’s web and get Belle away from Shawn, who’s let himself be caught in Jan’s! Nicole remembers how Belle stepped up for EJ during his trial and when he was still in prison so she knows Belle will be good to EJ.

Nicole will feel good about putting EJ and Belle on the right path to each other even if she does secretly relish Sami’s jealousy, knowing she’ll want who she can’t have! But maybe she’ll be wrong and Sami will stay with her first love Lucas – it’s a possibility!

Nicole doesn’t have a doubt that EJ will fall hard for Belle – they were together before but briefly, even though it’s obvious they still have a bond. As for Nicole, she’ll keep denying her own bond with Eric Brady (Greg Vaughan) while working towards her marriage to Rafe Hernandez (Galen Gering). That’ll be another dig into Sami’s craw, since she was also married to Rafe, but that’s not why Nicole says yes to the wedding dress! At least that’s the plan for now, even though Nicole dances around accepting Rafe’s marriage proposal but finally says yes!