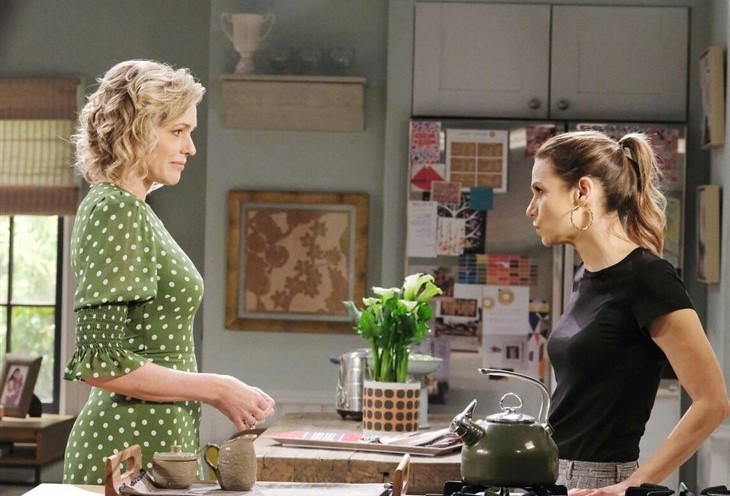 Days of Our Lives spoilers reveal that being played by Rafe Hernandez (Galen Gering) and Nicole Walker (Arianne Zucker) changed Ava Vitali (Tamara Braun). Even though “Racole” didn’t mean to hurt Ava, it caused the villain to revert to her old ways. Ava might go through another change after her son’s death and resurrection, though. Keep reading to find out more.

DOOL spoilers reveal that Ava came back to Salem and made a promise to Tripp Johnson (Lucas Adams). Ava swore that she would give up the mafia life and really tried to be a good person.

When Ava realized Rafe and Nicole had feelings for each other, she offered to step away so they could be together. However, instead of taking Ava up on her offer, Rafe and Nicole decided to betray her in the worst way and then lie about it. Even though Rafe and Nicole didn’t mean to hurt Ava, they did terrible damage and ruined her transformation.

Dealing with a broken heart and thinking she was made a fool of, Ava sought revenge. Ava tried to frame Rafe, a crime that the police commissioner nearly went to prison for. Then, Ava was arrested and betrayed Gwen Rizczech (Emily O’Brien) to get out of going to prison.

Ava even used living with Jake DiMera (Brandon Barash) to get under Gabi Hernandez’s (Camila Banus) skin. Although Jake and Ava weren’t romantic at the time, things have shifted.

Days Of Our Lives Spoilers- Tripp Johnson’s Death And Resurrection

Days of Our Lives spoilers reveal that things really took a turn for the worse when Ava learned Tripp died saving Allie Horton (Lindsay Arnold). In a twist of fate, Bo Brady (Peter Reckell) brought Tripp back to life.

It seems that Tripp’s death and resurrection might change Ava. Even though Ava has been a villain for most of her appearances in the NBC soap, fans liked her changing for the better. So, could we see another shift in the character? Could losing Tripp and then getting him back compel Ava to try being a good person again?

It is teased in Soap Opera Digest that Ava will make an apology. While this apology is for lashing out at Kayla Johnson (Mary Beth Evans), we might see other apologies. Ava tried to make things right with Gwen after having a nightmare. Plus, Tripp will want his mother to live life the right way no matter how heartbroken she is over “Racole.”

Perhaps Ava’s next apology will be to Rafe. After all, Rafe will need a love interest after Nicole breaks his heart. Even though Nicole accepts Rafe’s marriage proposal, it is teased that Eric Brady (Greg Vaughan) will be a complication. Fans are confident that “Ericole” will eventually get back together.

When that happens, Rafe will be alone again. Could Ava’s apology lead to her getting another chance with Rafe once Nicole breaks his heart?