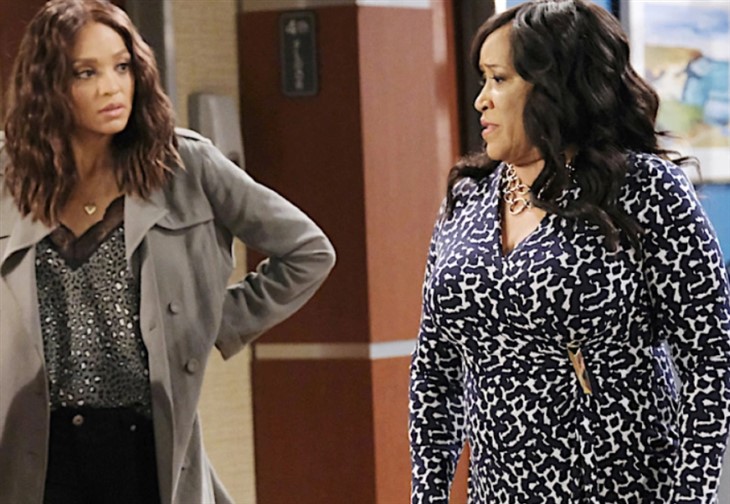 Days of Our Lives spoilers reveal that Lani Price-Grant (Sal Stowers) shot her birth father but Paulina Price (Jackee Harry) confessed to the crime. Paulina could face time in prison, especially since TR Coates (William Christian) wasn’t armed. Lani isn’t the type of person that would let someone else pay for her crime. So, will she confess and save Paulina from prison?

DOOL spoilers reveal that Lani found out the truth about TR when Eli Grant (Lamon Archey) woke up from his coma. Lani tried to reach Paulina, but the messages were never read. This is due to TR taking away Paulina’s phone. After TR knocked out Abe Carver (James Reynolds), the movie producer tried to whisk Paulina away.

However, Abe moaned and that alerted Paulina to the truth. Just as TR was about to hit Paulina, Lani burst through the door. Lani reacted with her emotions instead of police protocol and fired her weapon. Lani didn’t just injure TR but killed him.

Due to Lani not following police procedure, not warning TR that she was going to shoot, and firing her service revolver, she could lose everything. Lani might not only lose her job but her freedom as well as well.

This is what prompted Paulina to take the blame. Even though Lani wanted to tell the truth, Paulina interrupted her. Paulina told Lani that she could take care of herself. Paulina was taken to the police station and booked into jail.

Days of Our Lives spoilers reveal that Paulina and Lani will keep the truth from both Abe and Eli. However, Steve “Patch” Johnson (Stephen Nichols) noticed the gun at the crime scene was police-issued. This could poke a big hole in Paulina and Lani’s story.

During the week of May 16, Steve will share some concerning news with Abe. This is most likely about the gun. Abe will try to get answers, but it seems both Lani and Paulina will stick to their story. Abe might turn to Eli for answers.

Since Eli knows Lani best, including how she acts when keeping a secret, he could find out the truth. Eli might push Lani to tell the truth, but Paulina won’t stand for it. Paulina might be using this not to just protect Lani but to punish herself. Paulina thinks it’s her fault that TR even found Lani.

With that being said, Paulina might not want to risk the truth coming out during a trial. Paulina might make a deal with DA Melinda Trask (Tina Huang), which could include a prison sentence. However, Lani won’t allow her biological mother to go to prison for a crime she didn’t commit. Lani will probably confess the truth, but could there be unforeseen consequences in doing so?