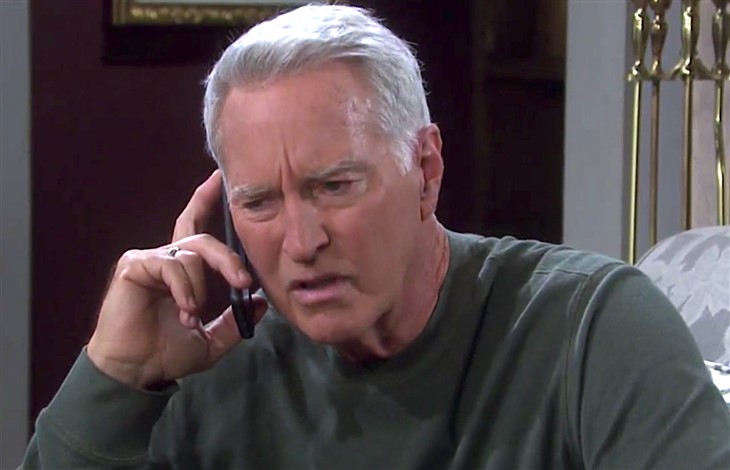 Days of Our Lives (DOOL) spoilers and updates tease that John Black (Drake Hogestyn) will have a warning for Jan Spears (Heather Lindell)! He’ll warn her not to stir the pot with Belle Brady (Martha Madison) in an upcoming DOOL episode!

Days Of Our Lives Spoilers – John Black Doesn’t Like That Jan Spears Lives With Shawn Brady!

John doesn’t like that Jan is living with Shawn Brady (Brandon Beemer) and taking full advantage of her “problem pregnancy” condition. It doesn’t matter to him that the doctors at the prison have told her she has to stay on bedrest. What he’s seen at the Brady home doesn’t look like bedrest to him, from what his daughter Belle has said, when she’s gone back Belle has never been in bed!

Belle has had nothing but trouble with Jan since she showed up, thanks to Sami Brady (Alison Sweeney) who recruited her to testify at a custody hearing. Sami was fighting for custody for Henry Horton (Nash and Clyde Gunderson) and Jan later kidnapped Belle on her wedding day to Shawn, to force Shawn to marry her!

Jan should know better than to ignore John’s warnings – after the kidnapping of Belle, he became angry and hit her so hard she went into a coma! John had been recovering from a stroke at the time that had affected the control center of his brain – it happened at his and Marlena Evans’ (Deidre Hall) home. She wasn’t in that coma for long, and tried to frame Belle for Charlie Dale’s (Mike C. Manning) murder, having stolen her red coat and worn it! Jan and Belle have a long history with each other, none of it good – Jan’s been obsessed with Shawn for many, many years and now she’s verifiably carrying his baby!

Jan has been gloating about living with Belle’s husband – including to Belle herself, and that has John mad enough to put Jan in another coma! Belle doesn’t go home often but she had gone with the intention to get back together with Shawn, since she realized he didn’t sleep with Jan on purpose. He certainly didn’t intend to impregnate her either, and he explained he felt like a rape victim and was too ashamed to admit to Belle he and Jan had sex.

Viewers will remember that MarDevil had morphed Jan into an exact duplicate of Belle, and Belle had walked in on Shawn and Jan in bed. John knows all about this as well since Belle has told him the story.

An angry John delivers a warning to the scheming Jan in no uncertain terms; he had better not catch her stirring the pot with his daughter! Belle is upset enough that her worst enemy and romantic rival is carrying her husband’s baby even though she acknowledges the devil set that up! Belle feels like her relationship with Shawn is forever changed and the marriage is quite possibly unfixable! She doesn’t know if she can deal with Shawn and Jan being forever tied together through the baby, and John warns Jan against continuing to use that fact to her advantage! If she does, she will deal with him!