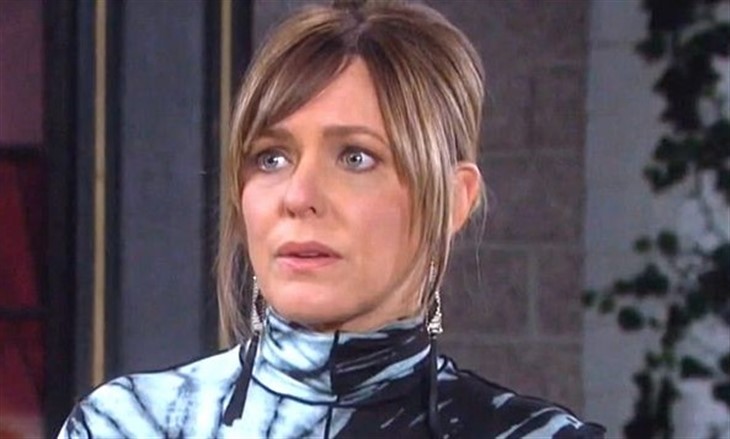 Days of Our Lives (DOOL) spoilers for Friday, November 25, 2022, reveal Nicole getting the wrong idea and doing the wrong thing.

After eavesdropping on Eric Brady (Greg Vaughan) and Jada Hunter (Elia Cantu) telling Roman Brady (Josh Taylor) and Kate Roberts (Lauren Koslow) that they planned to raise the baby Jada is carrying together, Nicole Walker (Arianne Zucker) wrongly jumped to the conclusion that Eric was going to dump her and be with Jada.

This prompts Nicole to do something rash, so she confronts Jada and asks her why she would want a baby with someone who is in love with someone else. Jada doesn’t appreciate her questions and has had it with her. She also doesn’t let Nicole know that she and Eric just plan to co-parent but not be a couple.

Unfortunately for Nicole, Eric overhears all of this and is absolutely furious with Nicole, telling her to mind her business and stay out of this pregnancy and Jada’s life. Will this cause Eric to just decide to be with Jada anyway and be done with Nicole? Talk about a self-fulfilling prophecy for Ms. Walker.

Xander Cook (Paul Telfer) feels very responsible for Susan Banks’ (Stacy Haiduk) death, but he can’t bring himself to tell Sarah Horton Cook (Linsey Godfrey) what he did. There is no way she would ever be able to forgive him for doing something so wrong and criminal after he promised her that he was on the straight and narrow for good this time.

However, Xander needs to talk to someone so he turns to Gwen Rizcech (Emily O’Brien) knowing that she won’t judge him. With Gwen also trying to turn over a new leaf, will she just tell him to be honest with an increasingly suspicious Sarah? It’s only a matter of time before she finds out what he did and he can at least be truthful to mitigate the damage to his marriage.

As for EJ DiMera (Daniel Feuerriegel), his grief, guilt, and despiar find him spinning out of control. Marlena Evans (Deidre Hall) tried to console him, but it doesn’t seem to have done any good as he becomes more self-destructive on Friday. Stream Days of Our Lives weekdays on Peacock by 6 am EST to see how these stories play out.

GH Spoilers: Michael Breaks Down To His Mom, And She Struggles To Contain Her Anxiety