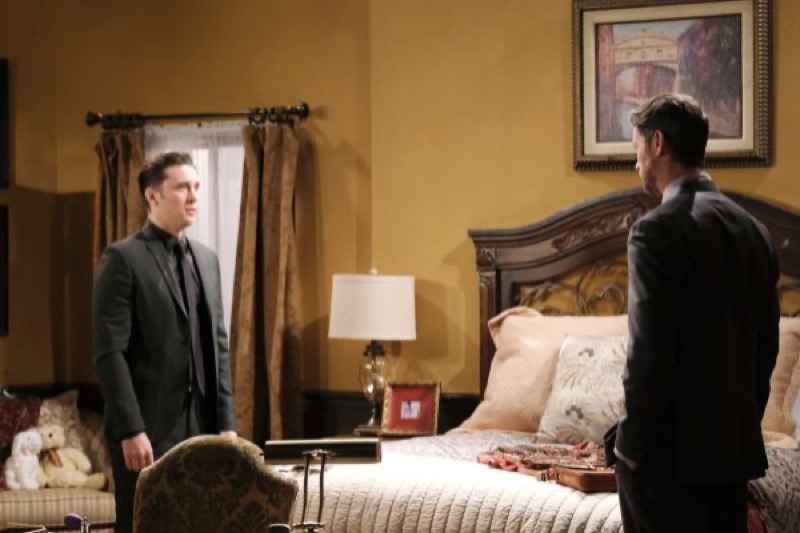 Days of Our Lives spoilers say Kate Dimera (Lauren Koslow) urged Chad to keep quiet for her. Kate knew that Lucas would go to prison if this came out. Kate believed that E.J. could beat the charges. Unfortunately, E.J. ended up in prison after all. The only reason E.J. got out was because of Belle Brady’s (Martha Madison) possession. Chad should have sided with this brother but chose to align himself with Kate, who has been the closest thing to a mother to him for years. Chad could have saved his brother months ago but chose not to. How can E.J. ever forgive Chad?

Days of Our Lives E.J. and Chad’s feud over Dimera Enterprise influenced Chad’s decision as well. When E.J. returned and underhandedly tried to take over the company. Chad and E.J. were forced to work together. When E.J. was arrested, Chad had a chance to take over. Unfortunately, Chad did not get what he wanted. Even now, Chad is bitter because he blames E.J. for turning Clyde Weston (James Read) loose on their family.

Chad believes that Clyde killed Abby as an act of vengeance. However, Clyde is innocent this time. Once the kidnapping information comes out, the brothers could be at each other’s throats again. With Abby’s death so fresh and her funeral just over, E.J. may be a little more understanding. After all, Chad didn’t do anything that he wouldn’t have done, right?

Days Of Our Lives spoilers tease E.J. could look at things as if his brother had suffered enough. Abby died in Chad’s arms after being stabbed by an intruder. Chad needs his family to gather around him right now instead of having another fight. E.J. has been trying to help with Chad’s children because of their mother’s death.

Will E.J. let bygone bye bygones and move on? E.J. can be ruthless but he knows his brother is suffering. E.J. and Chad can revisit this issue later, right now family needs to be the priority. Will E.J. forgive Chad?

Chad and E.J. are family and that will win out in the end. Will it be before they tear each other apart?