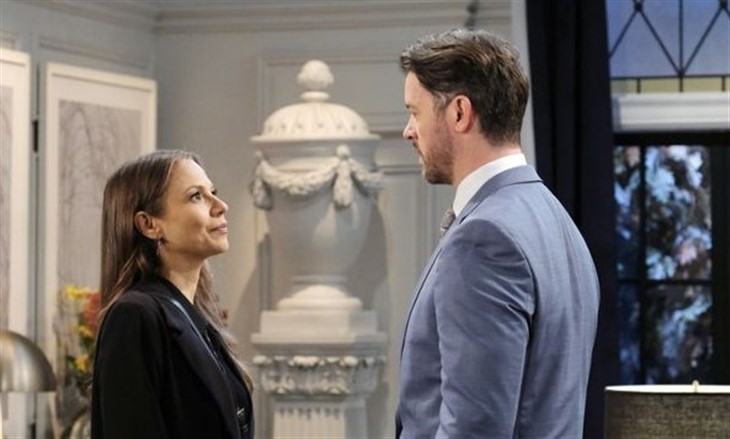 Days of Our Lives (DOOL) spoilers for the next two weeks are in. From November 21 to December 2, Ava Vitali (Tamara Braun) and EJ DiMera’s (Dan Feuerriegel) will have a shocking outcome. Xander Cook (Paul Telfer) turns to Gwen Rizczech (Emily O’Brien). Rafe Hernandez (Galen Gering) loses control while other characters brainstorm schemes.

DOOL spoilers for the week of November 21 reveal that Ava and EJ’s war will end with a fiery car crash. It is teased that EJ pays the ransom to get back his mother, Susan Banks (Stacy Haiduk). However, Ava thinks that Xander killed Susan. However, the kooky psychic manages to get free.

Unfortunately, Ava points a gun at Susan and forces her into a car. This is the car in the Fall promo for Peacock that shows Susan screaming as a car plummets over the edge. In that clip, the car bursts into flames.

During the week of November 21, fans can also expect Xander to get ready to confess to Sarah Horton (Linsey Godfrey). However, Xander will probably be interrupted or loses his nerve. Later in the week, Xander will open up about his guilt to Gwen. So, this could break “Xarah” while bringing Xander and Gwen back together again.

Days Of Our Lives Spoilers – What Else To Expect

During the week of November 28, Jada will catch Eric off guard. Nicole will spend some time alone and confused. Chloe Lane (Nadia Bjorlin) and Stefan DiMera (Brandon Barash) will get even closer. Gabi Hernandez (Camila Banus) unexpectedly invites Stefan and Chloe to her wedding.

It is also teased that Ava confronts EJ. So, Ava could survive the crash or this could be a nightmare, hallucination or perhaps EJ’s guilty conscience.

Which storyline are you looking forward to seeing the most? Share your thoughts and remember to keep watching the soap on Peacock to find out what happens next.

B&B Spoilers: Brooke Says No To Bill For Now – Can Ridge Comeback Happen?

Y&R Spoilers: 3 Must-See Moments For The Week Of November 21