B&B Spoilers: Brooke Says No To Bill For Now – Can Ridge Comeback Happen? 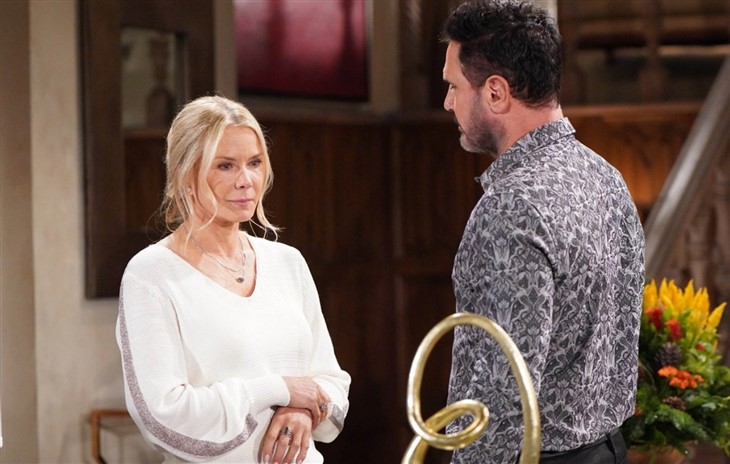 The Bold and the Beautiful (B&B spoilers document that Brooke Logan (Katherine Kelly Lang) continues to tell Bill Spencer (Don Diamont) a word he does not want to hear, no. But with persistence and a shift in perspective, it remains possible that Dollar Bill will reunite with Brooke.

Bill was the last man Brooke was married to before remarrying Ridge Forrester (Thorsten Kaye) for an incredible eighth time. And those eight times, do they represent destiny or lunacy?

Ridge is willing himself to remarry Taylor Hayes (Krista Allen). That re-nuptial is only his third marriage to Allen’s character.

Bill is arguably right about Ridge in this specific storyline. He is treating Brooke badly.

Ridge was fooled by his oldest son’s lie. Brooke supposedly reported Thomas Forrester (Matthew Atkinson) to the authorities for endangering his son. But the viewers know that Ridge went against type by not detailing every last ounce of the drama he believed Brooke caused.

This arguable plot hole gives Bill an opening to drive a tractor-trailer through. It also creates a reasonable question.

Brooke will have every right to be as disappointed in Ridge as she will be mad at Thomas. Yes, both Forrester men heard the supposed recording of Brooke’s voice. But Ridge refusing to discuss the matter with his then-wife made no sense.

Thomas’ demeanor and desire not to harangue Brooke also are suspicious. It is simply strange that Thomas would ask his family to move past Brooke and not discuss this apparent betrayal any further.

Once Brooke learns the truth, she will have to ask if Ridge is committed to her rather than the other way around. And, considering the facts, Brooke could easily decide that Ridge is not her destiny.

The Bold And The Beautiful Spoilers – Ridge Forrester Does Not Question Thomas Forrester?

Thomas made an even stranger request as compared to the ones referenced above. He asked his father not to mention the recording to Brooke.

Ridge would normally be set off by such a counter-intuitive statement. Yet, his initial reaction is to do as his son asks and move forward.

Hardcore viewers see Thomas’ calculation. He is hoping momentum holds, his parents remarry, and his actions are never revealed.

But Thomas’ misdeeds must be exposed. He will face his family’s wrath when that happens. But Ridge may have positioned himself to experience Brooke’s scorn on B&B.