Days Of Our Lives Spoilers: Jada’s Baby Bomb, How Will This Affect Eric And Nicole’s Reunion? 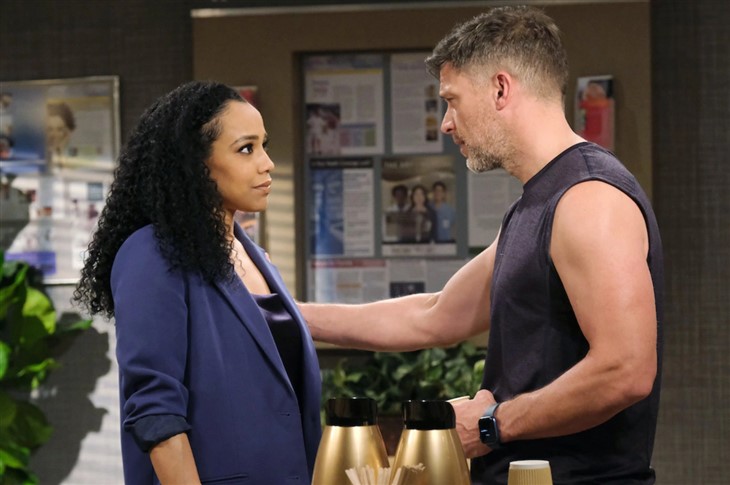 Days of Our Lives spoilers and updates tease in this week’s Soap Opera Digest that Eric Brady (Greg Vaughan) and Nicole Walker-Hernandez (Arianne Zucker) will reunite. But at the same time Nicole has told Rafe Hernandez (Galen Gering) she wants to be with Eric, Eric’s girlfriend Jada Hunter (Elia Cantu) drops a baby bomb on Eric!

Shortly after Jada walked to the door of Basic Black and saw Rafe’s wife and her boyfriend making out, she was in Brady’s Pub with Rafe. Jada hadn’t even gotten around to telling Rafe what she saw when she fainted; although she said she saw them together. Rafe had seen them together too and catches fainting Jada and got her to Salem University Hospital.

After Jada is taken into an examining room where she’s attended to by Dr. Sarah Horton-Cook (Linsey Godfrey) Rafe calls Eric to get over to the hospital. Eric and Nicole both rushed over because Nicole also wanted to tell Rafe she wants to be with Eric.

Once Eric and Nicole arrived at Salem University Hospital, they split up, Eric going to find Jada and Nicole going to find Rafe. Sarah had one result back from Jada’s blood tests so far and said it showed low blood sugar, but there are more to come. Nicole and Rafe went into a separate private room nearby for Nicole to break up with Rafe, who of course feels hurt and angry although not greatly surprised. He had thought that Nicole rushed into accepting his marriage proposal and into their elopement much too quickly after seeing Eric was back in Salem. Nicole feels terrible and remorseful for hurting Rafe, but meanwhile back in the examining room, Sarah returns and informs Jada and Eric that Jada’s pregnant-it couldn’t come at a worse time!

Days Of Our Lives Spoilers – A Difficult Decision

Now, Eric will have to make a difficult decision because he wants children and Nicole can’t have them; he loves her daughter Holly Jonas (Elin Alexander) but wants his own child.  Nicole also knows this, and she’s shattered and in limbo when she finds out she just broke up with Rafe to be with Eric and Jada’s pregnant with his baby. But it was the same thing with Rafe-he wanted his own children as well and would have sacrificed that to stay with her; she can conceive but can’t carry to term.

But with Eric being an honorable man and knowing he wants his own child, she is afraid he’ll do the right thing by Jada. He may even marry her, neither knowing that she walked in on her and Eric making out; and that could be a factor in Jada’s own decision-making.

GH Spoilers: Curtis Gets Big News, But Will Jordan Overstep?