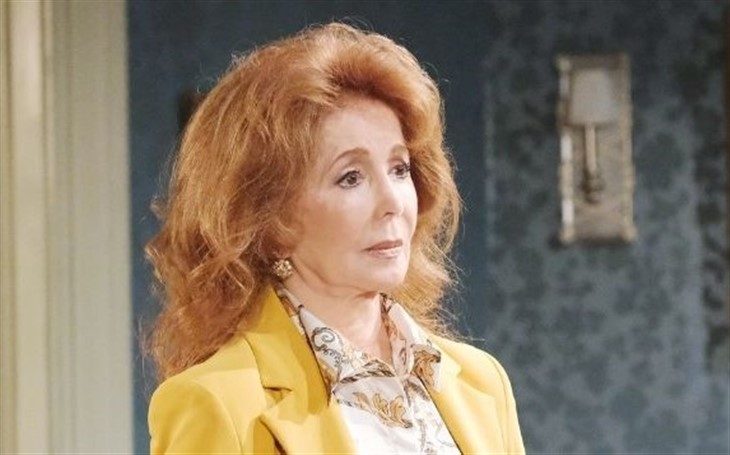 Days of Our Lives (DOOL) spoilers tease that after months of speculation, the once missing Dr. Sarah Horton (Linsey Godfrey) is headed back to Salem. Unfortunately, after being drugged, Sarah believes she is someone else entirely. And although she will be thrilled that Sarah is alive, Maggie Horton (Suzanne Rogers) will be devastated that Sarah doesn’t know her as her mother. Sarah believes she is woman named Renee DuMonde (the late Phelece Sampler). And although Renee and Maggie would have knows each other, Sarah will look at her mother as almost a stranger!

Days Of Our Lives Spoilers – Maggie Horton Will Do Everything She Can To Bring Sarah Horton Back!

Maggie will be quite upset when she first sees Sarah, She won’t understand why Sarah isn’t acting like herself and believes that she is Renee. Similarly, Xander Cook (Paul Tefler) who Sarah was going to marry wont’ ring any bells with Sarah either. But she will certainly recognize Tony DiMera (Thaao Penghlis) who was the love of Renee’s life. The same goes for her bitter enemies, Anna DiMera (LeAnn Hunley) and Julie Williams (Susan Seathford Hayes). But there may hope, Renee did consider one person to be her friend all those years ago, and that person may be uniquely qualified to help Sarah come back!

Although Dr. Marlena Evans (Deidre Hall) was her therapist, she was also Renee’s friend and one of the few people Renee ever felt comfortable with. When Renee was attacked by the Salem Stranger, it was Marlena who helped her cope with the artereffects from the killer’s vicious attacks on her. Over time, Renee trusted Marlena. That puts Marlena in the unique position of being someone who Renee will listen to. Over time, Marlena may even be able to bring Sarah back. But after everything Sarah went through, it’s not going to be easy.

Days Of Our Lives Spoilers – Dr. Sarah Horton Was Drugged And Shipped To An Island In A Trunk!

Sarah was drugged with one of Dr. Wilhelm Rolf’s (William Upton) drugs that he had originally given to Abigail DiMera (Marci Miller). The drug was designed to “melt her brain” so it was quite potent. And then Kristen Dimera (Stacey Haiduk) stuffed Sarah in a trunk and sent her to a remote island owned by the DiMera’s. It was there that Kristen gave Sarah Renee’s diary. Somehow, Sarah came to believe she was Renee as she read about the woman’s life history. Hopefully, Marlena will help Sarah find her way back to herself.

Days Of Our Lives – What Do You Think?

Is Sarah gone forever? Can Maggie get through to her? Or will it take Marlena to bring the real Sarah back? Anything can happen in Salem so stay tuned to Days of Our Lives airing weekdays on NBC. And don’t forget to check back right here regularly for all your Days of Our Lives news, information and spoilers!

GH Spoilers: Maxie Lets Austin Down Easy, It Britt The Next Best Thing?