Days Of Our Lives Spoilers: EJ, Anna, And Tony DiMera Spend Thanksgiving Together But Chaos Erupts 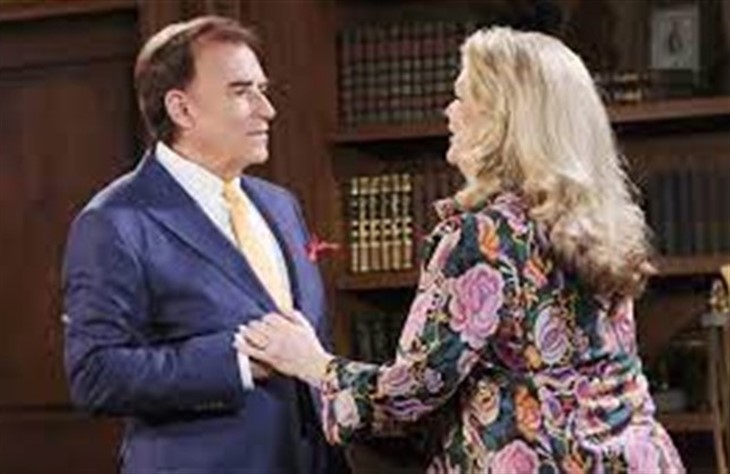 Days of Our Lives spoilers tease that EJ, Anna, and Tony DiMera (Dan Feurreriegel, Leann Hunley, Thaao Penghlis) will spend Thanksgiving together, but chaos will erupt when an unexpected guest crashes their get-together in an upcoming episode of Days of Our Lives!

Days Of Our Lives Spoilers – The Three DiMeras Hoped For A Nice, Quiet Thanksgiving

Days of Our Lives viewers can expect that the three DiMeras had hoped for a nice, quiet Thanksgiving with no drama and no chaos! They will spend their holiday in the DiMera mansion, and will expect to have the mansion to themselves since Chad and Abigail DiMera (Billy Flynn, Marci Miller) and their children are at the Horton house. But things do not go as they planned, and they find themselves with an unexpected guest – one who needs some help staying hidden for a few days!

Days of Our Lives viewers will recall that in a recent episode of Days of Our Lives, Kristen DiMera (Stacy Haiduk) blackmailed Gwen Rizchech (Emily O’Brien) into breaking her out of jail, threatening to tell Xander Cook (Paul Telfer) the truth about Sarah Horton (Linsey Godfrey). Gwen, of course believed Kristen’s blackmail tale that Xander would drop Gwen like a hot potato if he knew the truth about Sarah! As EJ, Tony and Anna are at the dinner table, in comes Kristen through the secret passage!

DOOL Spoilers – Anna DiMera Will Want To Trot The Mischievous Missy Right Back To Jail!

Days of Our Lives viewers can expect that Anna won’t be pleased at all to see Kristen interrupting their holiday meal! Kristen’s on the run – and the DiMera mansion will likely be the first place that the police will look for her at even if it is Thanksgiving! Anna will want to trot the mischievous missy right back to jail, because she doesn’t have the time or patience to harbor a fugitive! However, Kristen’s two brothers may differ, and Tony may overrule his wife – after all Kristen saved his life, and EJ was also in that warehouse explosion in Nashville a few years back and she saved his as well.

Both brothers owe Kristen and owe her big, and she’ll call in that favor! However, Days of Our Lives viewers know that once District Attorney Melinda Trask (Tina Huang) notices her prize prisoner is missing, holiday or not, she’ll have every available hand on deck to find Kristen and bring her back! Kristen likely wants to get her daughter Rachel Black (Finley Rose Slater) but she knows it would be difficult to take her on the run now – it was much easier when she was a babe in arms. Besides, that’s how she got caught the last time!

Days of Our Lives viewers know that as many people as have been locked up in the DiMera wine cellar and in the secret tunnels, the Salem Police already know to look there. As the police are banging on the door of the mansion, Tony, EJ and Anna must think of a place that Kristen can hide until EJ can get her out of the country! Anna has an idea, Kristen doesn’t like it, but on such short notice she has to hide somewhere – as EJ stalls the police reminding them he’s an attorney and they need a search warrant to enter and search, Tony and Anna take her to their rooms and she crawls under the bed!

They lock the door and as EJ cannot stop them from searching, Anna starts making certain noises and soon Tony joins in – the police aren’t going to come into a room that is locked when it sounds like a couple is getting busy with love in the afternoon! Kristen’s grossed out but safe for now! Days Of Our Lives viewers will see everyone scrambling until the police leave!