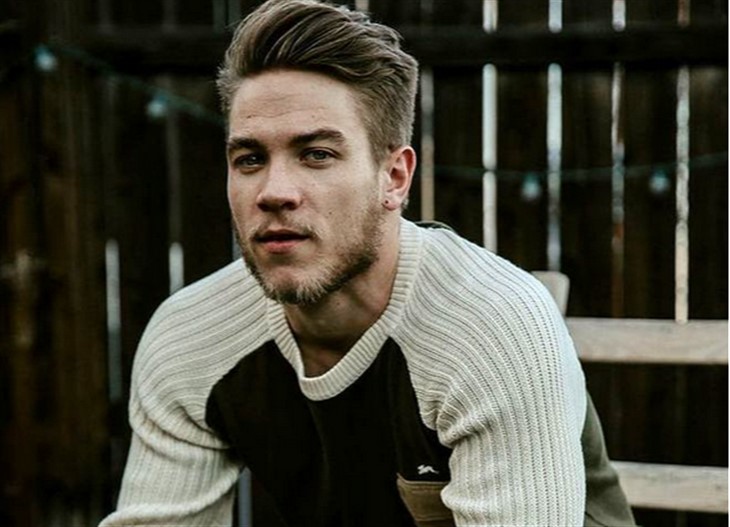 Days of Our Lives spoilers and updates tease that Lucas Adams, who played Tripp Johnson is out for a while, the character being “rested” on DOOL.

Lucas says it’s a decision on the part of the DOOL producers and writers to have Tripp leave Salem and it’s the second time he’s been written off. He says knowing ahead of time has definitely made this move much more easy considering he had time to prepare. When he returned this time, he wasn’t quite sure where his character was headed, especially once the Tripp/Allie Horton (Lindsay Arnold)/Chanel Dupree (Raven Bowens) triangle storyline was over.

He was surprised in the sense that they had the storyline of Tripp dying then being resurrected, only to send him back out of Salem! Lucas guesses Tripp is just one of those recurring characters who comes and goes and sometimes comes back again later.

Right after finishing up the broadcast DOOL program, Lucas was informed he’d be playing Tripp in the streaming spinoff Beyond Salem Two on Peacock, with it set to run in July. New episodes will drop daily from July 11-15, 2022, and viewers will need to have a device such as a Roku stick and subscribe to the premium (no commercials) version. He was surprised, since it was only a short time after completing his latest arc, where his character said goodbye to Steve “Patch” and Kayla Johnson (Stephen Nichols, Mary Beth Evans). They’ll be going to Seattle in Beyond Salem Two to visit their other two children and Tripp will be with his half-siblings in the spinoff.

Lucas says he has enjoyed playing Tripp in both versions of the show, although he notes that the Peacock version has larger and more elaborate sets. He says it was a different experience than playing in regular broadcast DOOL but it was really fun, and on the former he enjoyed the triangle storyline. He says that Tripp always seems to be the odd man out in the complicated relationships he has gotten himself into!

He notes being the straight man (literally) between two bisexual female characters was fun and he became friends in real life with both actresses. He and his real life girlfriend get together with Raven Bowens (Chanel) and Lindsay Arnold (Allie) frequently.

Lucas loved playing the savior storyline, in other words, where Tripp sacrificed his own life to save Allie’s soul by jumping out St. Luke’s window. He admits he didn’t do the stunt himself but he could imagine himself doing it vicariously through the stunt man! He enjoyed briefly playing the devil as well at one point in the storyline and he thought the yellow contacts were cool! He actually would have liked to play the devil for a longer period of time just because of that, but it wasn’t to be!

Days Of Our Lives Spoilers – Where From Here?

Lucas says that since he completed filming on both the regular show and the streaming spinoff, he’s kept busy. He and a friend of his, Joey Bragg are working on a comic book (one of the few who doesn’t use the term “graphic novel”!) He and his fiancée Shelby Wulfert are planning their wedding as well, which will take place in Texas. He also notes that his co-stars Tamara Braun (Ava Vitali), Stephen and Mary Beth told him he didn’t die, and they’ll call him to reprise Tripp eventually.

Tamara’s character Ava was “killed off” and resurrected and Stephen was offscreen as Steve for an extended period of time. They kept telling him he’d be back or he’d be too busy to come back, and he hopes so!