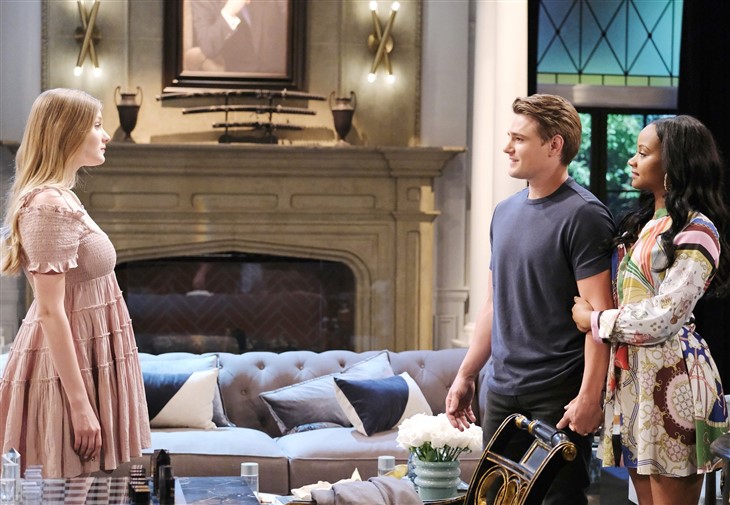 Days of Our Lives spoilers and updates tease that Chanel Dupree (Raven Bowens) will be forced to choose between twins! Future DOOL episodes will reveal that Allie Horton (Lindsay Arnold) and Johnny DiMera (Carson Boatman) will force her into a choice!

Days Of Our Lives Spoilers – You Can Have One, But You Can’t Have Both!

Allie and Tripp Johnson (Lucas Adams) broke up because Tripp knew Allie was torn between him and Chanel; Allie couldn’t deny it so she had to let him go. Allie has feelings for Chanel and Chanel has feelings for Allie, and for Chanel, it’s the same with Johnny; she can have one but she can’t have both!

DOOL Spoilers – Chanel Dupree Has A Difficult Choice To Make

Chanel has a difficult choice to make – now that she knows that neither of them dumped her under their own minds; the hurt doesn’t go away that she felt. Chanel puzzles over if she even should pick one over another or just be on her own for a while to give herself a chance to heal. Yet, she can’t just turn her feelings off like a faucet and neither can either of them, so someone will get hurt no matter what she decides! Either she hurts one of them by choosing the other one or she hurts by not choosing either one, and staying single and uninvolved! If she chooses to be noble, staying single and lonely will probably be the best choice; if they weren’t brother and sister it would be different.

Allie and Johnny are pressuring her unintentionally because their hearts are hurting and they both love her and want her, and she’s tempted to just pick eeny, meeny, miney mo! Whoever her finger points at would have to go – but that’s not the way to choose between two people when she loves both of them and both of them love her! She remembers with both of them, everything was very intense – of course with Allie right after being dumped by Johnny intensity would be expected.

It is a real struggle for Chanel since her heart is both so wounded and so torn; she doesn’t want to be alone but she doesn’t want to pick one! It keeps going over in her mind like a vicious circle-how do you pick between a brother and a sister and not divide them over yourself?

DOOL Spoilers – The Only Fair Thing To Do Is Be Honest

According to Days of Our Lives spoilers, Chanel finally decides the only fair thing to do is to be honest with both of them- she wants to keep both of them in her life but doesn’t want division. She loves them both and she wants to be with both but she knows she can’t have both in a romantic way!

Chanel asks for some space and more time to decide what to do, her heart is torn between them but also wounded. She tells them she needs more time to heal before she can make a clear decision either way, and they both understand!

GH Spoilers: Dante And Brando Team Up With Sonny To Expose Dex