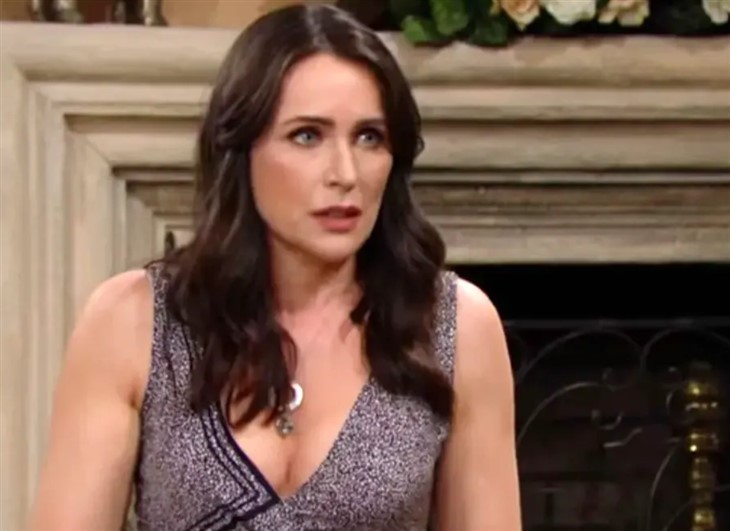 The Bold and the Beautiful spoilers reveal that Quinn Forrester (Rena Sofer) will share scenes with Wyatt Spencer (Darin Brooks). Quinn will tell her son an emotional truth, which must be her feelings for Carter Walton (Lawrence Saint-Victor). What’s interesting is that Wyatt could find out about Eric Forrester (John McCook). This might lead Wyatt to push “Quarter” back together.

The Bold And The Beautiful Spoilers – Paris Buckingham’s Wedding

B&B spoilers reveal that Carter has made his feelings for Quinn clear. However, Quinn insists on being loyal to Eric. In Quinn’s mind, Eric has been faithful to her and she wants to prove that she can do the same. What Quinn doesn’t know is that Eric has already moved on with Donna Logan (Jennifer Gareis) but hasn’t made a decision about the marriage yet.

Meanwhile, Carter is tired of being single and knows Quinn is unavailable. So, he rushes into a relationship with Paris Buckingham (Diamond White). In fact, during the week of June 20, Carter proposes to Paris, and she accepts.

Quinn and Wyatt will share scenes together during the week of June 20. It is teased in Soap Opera Digest that Quinn will share an emotional truth with her son. Wyatt will probably sense that something is going on and get his mother to talk.

So, Quinn might tell Wyatt that she is staying faithful to Eric out of loyalty. However, Quinn might also confess that she’s in love with Carter, who is now marrying Paris.

The Bold And The Beautiful Spoilers – Wyatt Spencer’s Discovery

The Bold and the Beautiful spoilers reveal that Wyatt could take action when he learns that Eric isn’t being as faithful as Quinn believes. Hope Logan Spencer (Annika Noelle) discovers a juicy secret, which could be Eric and Donna’s affair. Hope might share this intel with Liam Spencer (Scott Clifton), who could tell Wyatt.

Another possibility is that Flo Logan (Katrina Bowden) finds out about Donna’s secret, which she might reveal to Wyatt.

The Bold and the Beautiful Spoilers: Stopping Carter Walton

When Wyatt realizes that Eric and Donna are in love, he could take action. Wyatt might plan to tell his mother about Eric and Donna, but it would be more interesting if he takes a different direction. Maybe Wyatt can’t reach Quinn or worries that she will focus on targeting Donna instead of stopping Carter’s wedding.

This could prompt Wyatt to go to Carter to tell him the bombshell. When Carter realizes that Quinn is now available and wants him, it could lead to a shocking break-up at Paris’ wedding. It seems that Eric and Quinn will both have happy endings, just not with each other.