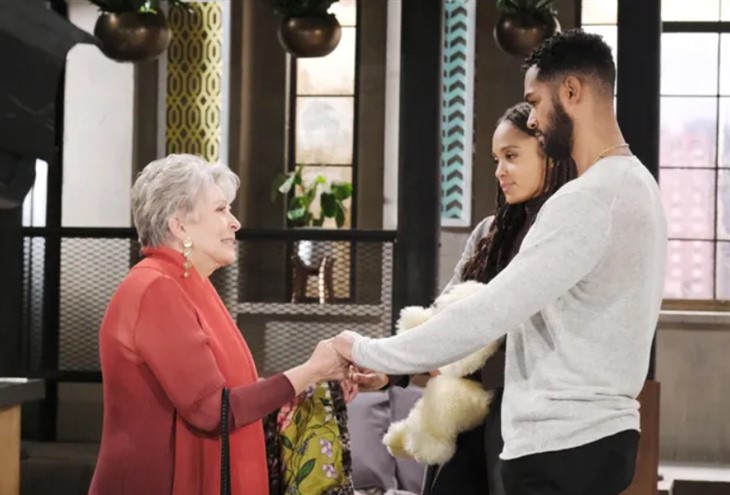 Days of Our Lives spoilers tease that Julie Williams (Susan Seathford Hayes) is fiercely protective of all her family, but none more than her grandson Eli Grant (Lamon Archey). Recently, Julie almost lost Eli when he was shot in the line of duty by TR Coates (William Christian). TR was actually Eli’s wife Lani Price’s (Sal Stowers) biological father. Eli had discovered that TR was still using heroin and as they struggled for the gun, TR gained control and shot Eli in the head, leaving him dead. Eli did manage to survive but was in a coma for several months. As soon as he woke up, Eli told Lani that it was her own father who had shot him.

When Lani reached her mother Paulina Price (Jackee Harry), TR appeared as if he was about to stroke her. So, without thinking, Lani shot TR, who died moments later. But since TR didn’t have a gun, Pauling made the decision to claim that it was her who shot TR. Paulina knew that Lani, who is a cop, could not only lose her job but could possibly go to prison as well. Lani was still shell-shocked at the time, so she didn’t contradict Paulina.

Lani confided in Eli that she shot TR. But Eli wanted Lani to go along with Paulina’s story. He reasoned that Paulina would have a good chance of getting exonerated. But if the truth came out now, Lani could also be accused of a cover-up which would make her look all the more guilty. But it’s obvious that Lani isn’t going to be able to remain quiet for much longer. The truth is about to come out, most likely during Paulina’s wedding to Abe Carver (James Reynolds).

Days Of Our Lives Spoilers – Julie Williams Will Have Something To Say!

Julie isn’t really known for keeping her opinions to herself. She will be shocked to learn that it wasn’t Paulina who shot TR. More than likely, Julie will be upset that now that Lani has decided to tell the truth, not only will Paulina’s sacrifice be in vain, but Lani’s twins may be forced to be without their mother if Lani does indeed go to prison. And Eli will also be alone, taking care of those children on her own. They will certainly eventually reconcile, but look for things to be cold between Julie and Lani for quite a while!

DOOL Spoilers -What Do You Think?

Will Lani finally crack? Will either Paulina or Lani go to prison for TR’s murder? How will Julie react to the truth? Anything can happen in Salem so stay tuned to Days of Our Lives airing weekdays on NBC. And don’t forget to check back right here regularly for all your Days of Our Lives news, information, and spoilers!