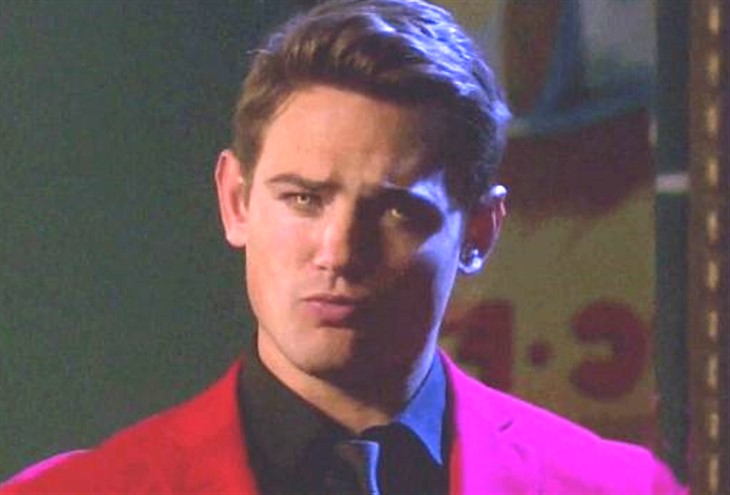 Days of Our Lives (DOOL) spoilers for Monday, January 10, 2022, reveal JoDevil breaking poor Chanel’s heart. She is absolutely stunned and so is everyone else at their fancy DiMera wedding party.

It was only hours earlier when Johnny (Carson Boatman) and Chanel (Raven Bowens) were in bed and happy as could be, but then Satan got a hold of Johnny, dressed him in a bright red suit, and acted like the former Tonight Show host. His actions made sense to nobody and made even less sense when he suddenly announced he was dumping Chanel. He just didn’t want to be married anymore.

A devastated Chanel is both furious, hurt, and humiliated and she turns to Allie Horton (Lindsay Arnold) for comfort. Allie can’t believe her twin brother would ever do such a thing but she feels she needs to be there as a support system for Chanel than to lay into Johnny right away. That’s going to have to wait for later as she takes Chanel back to her apartment, where one thing leads to another, and then…

Too bad Tripp Dalton (Lucas Adams) is at work at the hospital trying to figure out what’s wrong with Susan Banks (Stacy Haiduk) this time around because, with Susan, it’s always something, isn’t it?

Do not hurt one of Paulina Price’s (Jackee Harry) daughters because she is not about to take that lying down. This is now Chanel’s second marriage in under a year and it’s over already. And this time her daughter is heartbroken, so Paulina is taking numbers and the DiMeras — especially Johnny — better watch out.

Meanwhile, Abe Carver (James Reynolds) and John Black (Drake Hogestyn) have a talk about life being too short. Will this help change Abe’s mind about his life with Paulina? He admitted he still loves her but he can’t forgive her for lying to him. Perhaps John will help him change his mind, especially when he reminds him how they almost lost Marlena (Deidre Hall) to the devil again. Too bad they don’t know the devil is still sticking around. Stay tuned to Days of Our Lives weekdays to see how these stories play out.

B&B Spoilers: Zende Has Quite A Surprise For Paris