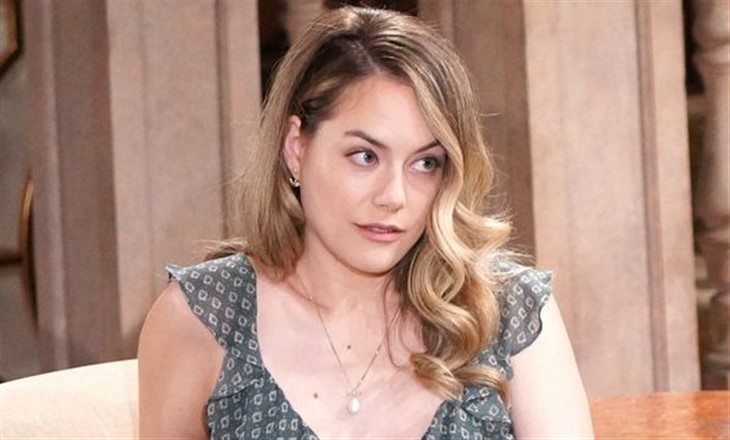 The Bold and the Beautiful spoilers reveal that Hope Logan Spencer (Annika Noelle) is curious about “Lina,” who is really Sheila Carter (Kimberlin Brown). Hope might try to get to know Lina better by inviting her to dinner. However, this could complicate and endanger Deacon Sharpe’s (Sean Kanan) future as well as his freedom.

The Bold And The Beautiful Spoilers – Meeting ‘Lina’

B&B spoilers reveal that Hope was surprised to see a strange woman in Deacon’s new apartment. By the time Sheila turned around to face Hope, her red wig and mask were already on. So, Hope has no idea that “Lina” is really Sheila.

Hope tried to ask Lina questions, but Sheila didn’t want her voice or answers to raise red flags. Hope did say that Lina reminded her of someone, but couldn’t quite place the woman.

When Hope couldn’t get Lina to talk, she turned to Deacon. However, Deacon was extremely vague and secretive with his answers. Hope is naturally curious and wants to know who Deacon’s new girlfriend is. Since Hope can’t seem to get any answers from Deacon, Hope could come up with an idea.

The Bold And The Beautiful Spoilers – Hope Logan Spencer’s Invitation

The Bold and the Beautiful spoilers reveal that Hope could invite Deacon and Lina to dinner. Hope will want Lina to meet Liam Spencer (Scott Clifton) as well as Brooke Logan Forrester (Katherine Kelly Lang). Even though Brooke likely won’t be at the family dinner, she could be just as curious as to who Deacon is dating.

Hope thinks a dinner will be a great way to get Lina to stop being so shy. Now, Deacon might make excuses as to why Lina can’t attend the dinner. However, this will only make Hope suspicious. So, Deacon might not have any choice but to take Sheila to the event. If this happens, Deacon will probably warn Sheila to be on her best behavior.

During the dinner, Hope will probably pepper Lina will all kinds of questions. Lina will have to stick to one story and keep her answers straight.

There might be other topics discussed, such as the epic reunion of John “Finn” Finnegan (Tanner Novlan) and Steffy Forrester Finnegan (Jacqueline MacInnes Wood). “SINN” might be brought up when Lina asks questions about Douglas Forrester (Django Ferri).

This means that Sheila’s horrific acts could be mentioned. It will be nearly impossible for Sheila to stay quiet while she is being bashed at the dinner table. Could she completely unravel and expose her true identity? Share your thoughts and remember to keep watching the CBS soap to see what happens next.