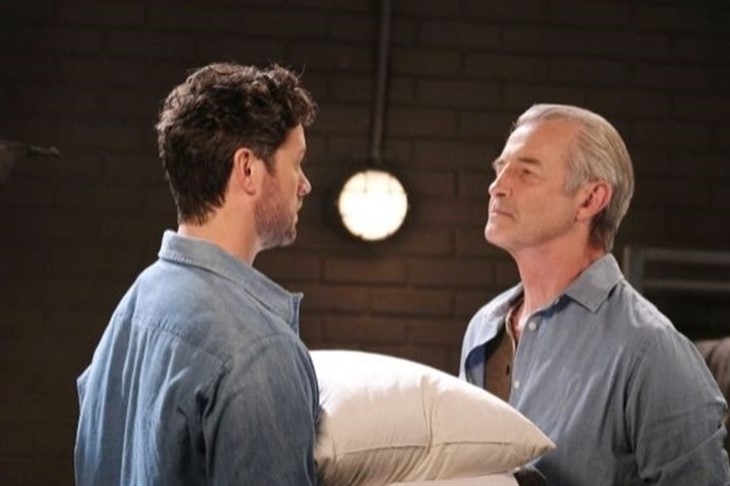 Days of Our Lives spoilers reveal EJ DiMera (Dan Feuerriegal) knows he can’t survive prison on his own. EJ has a prison survival plan in motion, which requires him to stay on Clyde Weston’s (James Read) good side. When EJ remembers everything about his shooting, he threatens Clyde. So, why does EJ back down? The actor explained the “gentleman’s agreement.”

Days Of Our Lives Spoilers – Preparing For Prison

DOOL spoilers reveal that Belle Brady (Martha Madison) did her best when defending EJ. However, the cards were stacked against them from the beginning.

Kate Roberts (Lauren Koslow) wasn’t going to tell the truth to protect her son. Lucas Horton (Bryan Dattilo) lied on the stand to prevent his secret from getting out. Sami DiMera (Alison Sweeney) never even showed up and Johnny DiMera aka “JoDevil” (Carson Boatman) made sure Chad DiMera (Billy Flynn) didn’t tell the truth on the stand.

Once EJ was given a guilty verdict, he had to accept his fate. EJ also had to come up with a way to survive prison. The actor told Soap Opera Digest,

“… he needs to ‘trust’ Clyde in here, because Clyde has his back. He needs friends in the big house. It’s all part of EJ’s survival plan.”

Clyde was responsible for EJ’s shooting and “death.” Even though EJ eventually came back, he went through years of tough recovery. During the recovery, EJ and Sami weren’t able to connect, which led to her sleeping with Lucas. Then, the kidnapping, frame job and prison sentence happened. So, Clyde is responsible for EJ’s ruined life for the past several years.

At first, EJ doesn’t remember anything from his shooting. Then, Clyde used a familiar phrase, which brought back one flashback. Just as Orpheus (George DelHoyo) warned Clyde, EJ will suddenly remember everything.

Days Of Our Lives Spoilers – Confrontation And Threat

Days of Our Lives spoilers reveal that EJ is filled with fury when everything comes flooding back to him. EJ explodes and threatens to sabotage Clyde’s parole hearing, which is the very next day. However, Clyde isn’t intimidated and warns EJ to think twice or else.

EJ does back off and decides not to do anything to Clyde at the moment. Feuerriegel explained,

“It makes EJ agree to work things out. And they come to, shall we say, a gentleman’s agreement.”

However, just because EJ doesn’t do anything now doesn’t mean he won’t in the future. EJ still has connections on the outside. Could EJ be planning a long-term, slow-burning revenge plot?