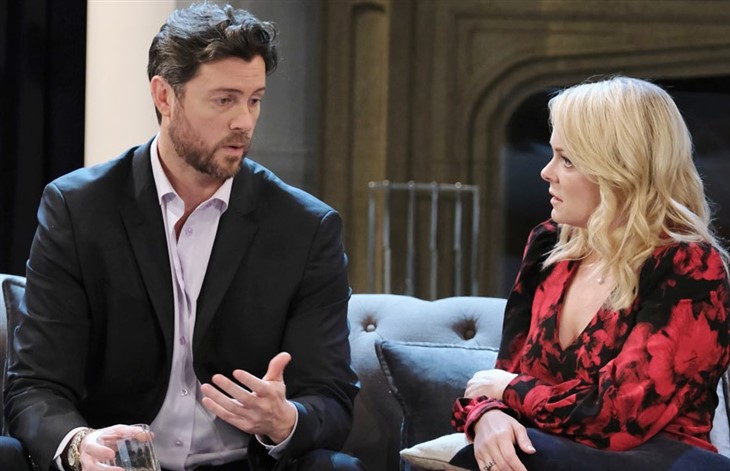 Days of Our Lives spoilers reveal that Belle Brady (Martha Madison) accuses EJ DiMera (Dan Feuerriegel) of using her to hurt Sami Brady (Alison Sweeney). However, EJ tells Belle that she’s using him as well. Afterward, the two admit that they want to hurt the people who have hurt them. Feuerriegel teased that there’s some revenge, so what will they do next?

DOOL spoilers reveal that EJ and Belle are getting busy between the sheets when Sami comes storming in. After Sami interrupts, EJ admits that there is more to his relationship with Belle than legal advice. Sami then demands a divorce as she wants to marry Lucas Horton (Bryan Dattilo).

EJ tries to convince Sami not to marry Lucas. However, Sami refuses and insists that EJ sign the divorce papers. Knowing that Sami has her mind made up, EJ signs the paperwork. However, Feuerriegel told Soap Opera Digest that EJ doesn’t want to be divorced as he still feels connected to Sami.

After Sami leaves, EJ tries to get Belle back into bed. However, Belle realizes that EJ really isn’t over Sami. Belle then blasts EJ for using her just to hurt Sami. EJ doesn’t deny the allegation. However, he makes his own accusation about Belle’s true intentions. EJ tells Belle that she’s using him as well. EJ calls her out on sleeping with him to hurt Shawn Brady (Brandon Beemer).

Days Of Our Lives Spoilers – Confessions And Revenge

Days of Our Lives spoilers for the week of June 27 reveal that EJ and Belle will push each other’s buttons on this issue. Eventually, they both agree that they are using each other. However, there is also a real connection between them and complicated feelings. Feuerriegel explained,

“There’s definitely a connection between EJ and Belle, and EJ wants to do this. It just so happens that a little revenge could occur as well. It’s like the icing on the cake.”

EJ and Belle’s interesting conversation doesn’t derail the passion they feel for one another. Despite admitting they are using each other, EJ and Belle end up back in bed.

So, could EJ and Belle plan to help each other get revenge? Perhaps Belle will help EJ prove that Lucas kidnapped Sami and framed him for the crime. In exchange, EJ might try to expose Jan’s big secret.

What do you think of EJ and Belle’s unexpected confessions to one another? Could EJ and Belle work together to expose secrets and get back the people they love? Or will their scheme end up backfiring?