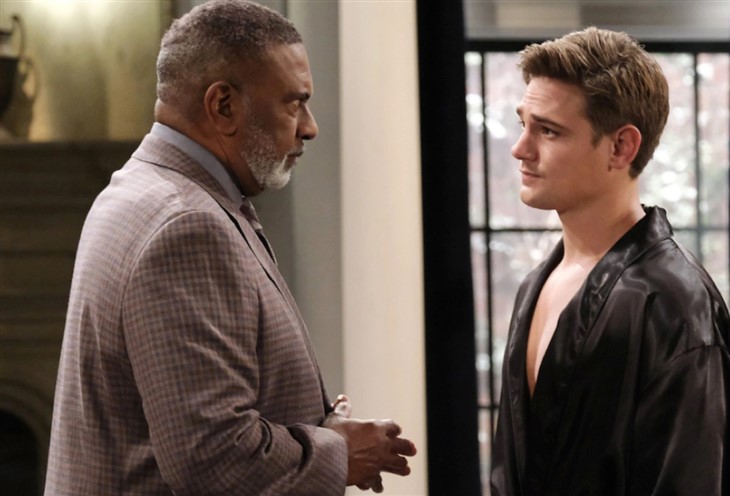 Days of Our Lives spoilers tease that T.R. “Ray” Coates (William Christian) will find out Lani Grant (Sal Stowers) is Chanel Dupree’s (Raven Bowens) sister after she accidentally slips up, in an upcoming episode of Days of Our Lives!

Days of Our Lives viewers will recall that TR Coates showed up at the DiMera mansion looking for Johnny DiMera (Carson Boatman) to deliver as per their deal, to deliver the movie about Marlena Evans’ (Deidre Hall) possession story! Apparently Johnny had made a deal with Coates to distribute the movie and it’s a good possibility that he had invested in it as well, and Johnny, as Johnny, not as Johnny DiDevil told him no dice!

Days of Our Lives viewers will recall that Coates didn’t like that answer at all, so Johnny is going to have to deliver a movie or give Coates a taste of the devil himself, which he chose not to do! Then Coates ran into Paulina Price (Jackée Harry) in Horton Town Square, not long after Chanel had a comforting encounter with Abe Carver (James Reynolds); needless to say, Paulina was real upset! Ray was her abusive ex and Lani’s birth father, and that was the reason for the family secret that just recently came out and the reason Paulina gave Lani to her sister to raise!

DOOL Spoilers – Chanel Dupree Has No Idea Who TR Coates Is

Days of Our Lives viewers can imagine that Chanel would have no idea that the older gentleman hanging around Salem is Paulina’s abusive ex and Lani’s birth father, since Paulina probably won’t think to warn her! Coates is pretty insistent on Johnny delivering what he promised, and if he keeps up with DiMera news at all, he may have found out he has a wife, although he won’t know she was recently dumped!

Days of Our Lives viewers might see Coates swing by Sweet Bits for a snack or see her out with her niece and nephew for a stroll, and recognize the babies from Paulina and Lani’s near miss! Viewers will recall that Paulina and Lani came much too close to Coates in a previous Days of Our Lives episode, and of course he’ll ask Chanel if she’s the babysitter! Chanel, not knowing who the older gentleman is, may tell him that Carver Grant (Bali and Veda Singh) and Jules Grant (Arya and Wynter Wells) are her nephew and niece and of course then he’ll know that Lani is her sister!

Days of Our Lives viewers can expect that obviously, Coates will have some pointed questions for Paulina Price about Lani Grant, after all, it doesn’t take a rocket scientist to figure out Lani would be the right age! Days of Our Lives viewers can also expect that Paulina will be pretty panicked, as she was when she and Lani had that close call in Horton Town Square, but now that he does know the truth she’ll really worry! Sometimes people change – but the way Coates has been bullying Johnny for what he owes him, like a loan shark wanting repayment, it can pretty much be assumed that he’s still a pretty dangerous dude! It may take a good dose of DiMera devilment to put Coates in his place in the end, but better yet to cuff him and put him behind bars – what he doesn’t know is that his daughter is a cop!

How Many Husbands Has Sharon Newman Had On The Young And The Restless?