Days Of Our Lives Spoilers: Chanel Rejects Tripp And He Snaps! 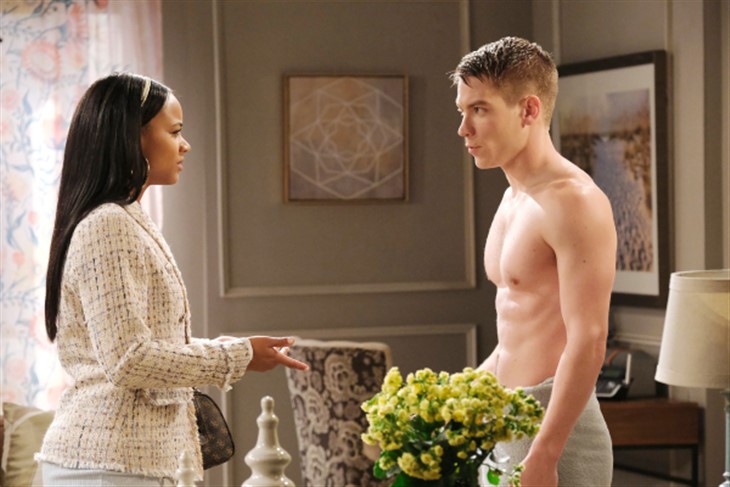 Days of Our Lives spoilers tease that neither Chanel Dupris (Raven Bowens) nor Dr. Tripp Johnson (Lucas Adams) have made much luck in the romance department. Tripp was rejected by Ciara Brady (Victoria Konefal) in favor of former serial killer Ben Weston (Robert Scott Wilson). And most recently, he broke off his engagement to Allie Horton (Linsey Arnold) when he found out that Allie and Chanel had slept together.

Days Of Our Lives Spoilers – Dr. Tripp Johnson Thinks Something Is Wrong With Him.

Tripp just doesn’t understand why the woman he falls in love with ends up wanting someone else. He’s expressed that he fears something is wrong with him. Tripp is genuinely a good guy but can come across as boring and judgmental. Tripp is neither of those things but he wears his heart on his sleeve and sometimes speaks his mind without really taking the time to think about his words.

Chanel’s situation is even messier. Although she and Allie had been friends for years now, there was an attraction between them that didn’t go anywhere because Allie wasn’t ready to admit that she is bisexual. So, she allowed herself to be wined and dined by Allie’s twin, Johnny DiMera (Carson Boatman). They married overseas when Johnny convinced Chanel they needed to get away from Salem.

Days Of Our Lives Spoilers – Chanel Dupris Was Dumped By Both Twins Because They Were Possessed!

After they returned to Salem, Chanel and Johnny planned a big party to announce their wedding, But the Devil had to leave Dr. Marlena Evans (Deidre Hall) when too many people began to catch on to the fact that she was possessed. But the Devil still had plans in Salem so he took over Johnny, and the first thing he did was dump Chanel in the most public way. Not long after, Allie and Tripp broke up,

DOOL Spoilers – Allie Horton Was Finally Ready To Accept Herself As Bisexual!

Allie realized she needed to figure out exactly how she feels about Chanel. After realizing she was bisexual, she was finally ready to explore a romance with her long-time friend. For her part, Chanel was thrilled that she and Allie were finally a couple. But the devil found it necessary to jump from Johnny and into Allie. Just like with Johnny, Allie immediately dumped Chanel. For now, Chanel is completely unaware that both Johnny and Allie weren’t in control of themselves.

Tripp and Chanel are both feeling lonely but both were surprised when they shared a kiss, Tripp will likely fall for Chanel fairly quickly. But around this time, the truth about the possessions in Salem will be made public and Chanel will be torn between Johnny and Allie. But either, Chanel will try to explain that she can’t make things even more complicated by getting serious with Tripp!

Tripp was already struggling to accept that there was nothing wrong with him, but yet another rejection may send Tripp spiraling. As his mental state continues to deteriorate a brutal murder will shake up everything in Salem. And it just may be Tripp who will commit the brutal crime and he may not even know it! Hopefully, Tripp will seek out help long before that because if he doesn’t, things could take a very dark turn for the new doctor!

Do Tripp and Chanel have any romantic chemistry? Or will Tripp once again be let down by a woman he’s interested in? Is Tripp in danger of having a total mental breakdown? Anything can happen in Salem so stay tuned to Days of Our Lives airing weekdays on NBC. And don’t forget to check back right here regularly for all your Days of Our Lives news, information, and spoilers!