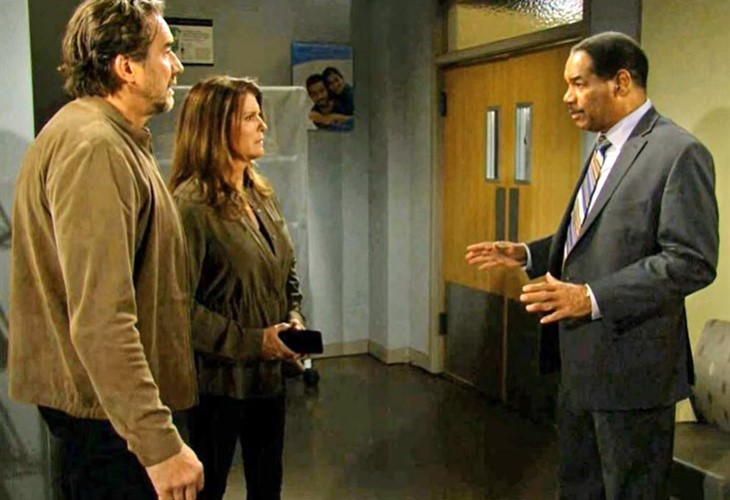 The Bold and The Beautiful spoilers and updates tease that someone will interrupt just as police are about to get answers in an upcoming episode of B & B!

The Bold And The Beautiful Spoilers – Steffy Forrester Finnegan Is Awake

Steffy Forrester Finnegan (Jacqueline Macinnes Wood) is awake from her coma and starting to remember some things, even though she’s still blocking out when she was shot. She thinks she’s still married to Liam Spencer (Scott Clifton) and their daughter Kelly Spencer (Sophia Paras McKinlay) is much younger than she is now. But that doesn’t stop Ridge Forrester (Thorsten Kaye) and Deputy Chief Bradley Baker (Dan Martin) from pushing her to remember!

This makes Sheila Carter (Kimberlin Brown) very nervous – she doesn’t want Steffy to remember she was the shooter, especially now that she’s in good with her mom! Taylor Hayes (Krista Allen) is very grateful Sheila saved her life, and she wants it to stay that way!

Sheila wants to have access to baby Hayes Finnegan (Piper Harriott) more than anything since she made the colossal error of killing his father! It was an accident – John “Finn” Finnegan (Tanner Novlan) had jumped in front of Steffy, who she was really trying to kill! Sheila’s grief for Finn is real – and her fear of being kept from her grandson is just as real, as is the fear that is what will happen. That is unless Steffy never remembers the shooting and cannot tell what happened to Steffy’s parents and the police! Sheila keeps a close watch on Steffy, feigning concern for her daughter-in-law when she really is worried she’ll identify her as her shooter!

There are some hints that Steffy is starting to remember what happened to her and Finn as she starts having some flashbacks. It isn’t much, just some short scenes in her head she cannot connect to anything, but there are some fearful looks at Sheila! However, this could be from long ago in the past when Steffy was a child and Sheila shot Taylor in front of her.

As long as Sheila plays the worried mother-in-law and grandmother and mirrors Taylor’s concerns in Steffy’s presence, there may not be so much to worry about. But if Steffy starts connecting her unease around Sheila to something more recent, then there’s trouble ahead!

B & B Spoilers – Steffy Forrester Finnegan Starts Remembering The Shooting

Sheila knows she must intervene when she sees how terrified Steffy is, and she takes a page from Taylor’s playbook, but concerned Steffy will point to her! Sheila tells Ridge and Baker to ease up – all this terror isn’t good for Steffy’s recovery, and Taylor hears and she agrees! You cannot push a traumatic memory out of someone!

The Young And The Restless Spoilers: 3 Must-See Y&R Moments Week Of April 25

Days Of Our Lives Spoilers: Chanel Rejects Tripp And He Snaps!