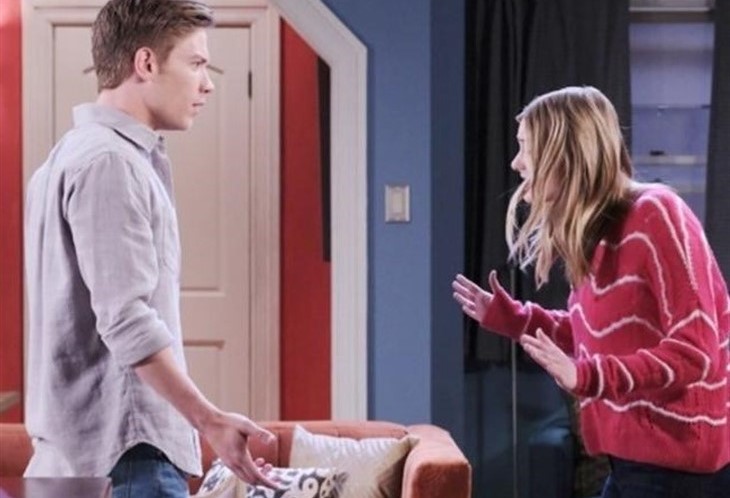 Days of Our Lives spoilers reveal that Tripp Johnson (Lucas Adam) proposes and Allie Horton (Lindsay Arnold) says yes. However, Allie is keeping a scandalous secret, which Johnny DiMera aka “JoDevil” (Carson Boatman) overheard. Could the truth about Allie and Chanel Dupree’s (Raven Bowens) night of passion come out at the engagement party?

Days Of Our Lives Spoilers – Tripp Johnson’s Next Step

DOOL spoilers reveal that Tripp is now a doctor, which means his career is on track. Even though Tripp mentioned being overloaded with student loans, he is ready to take the next step in his personal life. Tripp plans on proposing to Allie, something that Roman Brady (Josh Taylor) wasn’t so sure about.

In the 2022 preview published by Soap Opera Digest, head writer Ron Carlivati confirmed that Allie says yes. However, she might not agree to marry Tripp right away. It is teased that Allie thinks carefully about not only her future but that of her son, Henry Horton (Nash and Clyde Gunderson).

So, it seems that Allie will have to ponder carefully if she really is in love with Tripp and if she wants to spend the rest of her life with him. Allie might also wonder if she can marry someone while hiding a huge secret.

Days of Our Lives spoilers reveal that Carlivati teased to SOD that the devil hates to see happy couples. So, “JoDevil” is causing problems with Jake DiMera (Brandon Barash) and Gabi Hernandez (Camila Banus).

However, it is likely that Lucifer will also target Tripp and Allie. After all, fans saw “JoDevil” eavesdropping on Allie and Chanel’s conversation for a reason. So, it’s clear “JoDevil” will expose Allie and Chanel’s night of passion. It’s not a matter of if, but how and when. The couple will probably have an engagement party celebrating their new chapter. Even though Allie isn’t on good terms with her twin brother right now, Johnny will still be invited. Even if Johnny isn’t asked to come to the party, the devil loves to crash happy events. Expect “JoDevil” to expose Allie’s betrayal and it just might happen during the engagement party.

When the truth comes out about Chanel, Allie won’t be the only one that needs to reconsider her future. Tripp will also have a lot to think about. Tripp has repeatedly asked Allie about her feelings for Chanel. Each time, Allie has denied having any feelings for Chanel.

Tripp might have understood and had a civil breakup with Allie if she told the truth. After all, Tripp gets that feelings can be complicated. However, to betray Tripp and then lie to his face all this time means their relationship could end much differently. Plus, will Tripp ever really trust another girl again?

Share your thoughts about Allie, Chanel, and Tripp’s storyline. The soap is currently on hiatus until the winter Olympics are over. Expect to see a new episode on Monday, February 21.

Prince Harry Wants To Take Kids To The UK