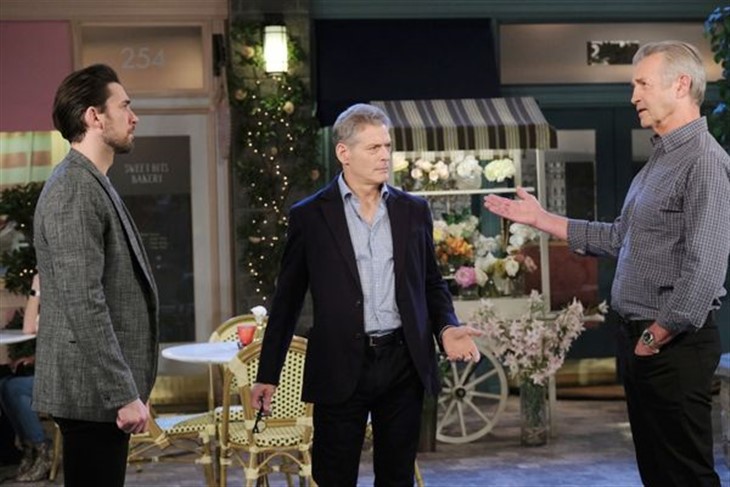 Days of Our Lives spoilers tease that after months of investigation and false accusations, a killer will be revealed! While it looks like Leo Stark (Greg Rikaart) was the person who killed Abigail DiMera (Marci Miller) and stabbed Sonny Kiriakis (Zach Tinker), the truth will soon come out that it was Clyde Weston (James Read) all along! Clyde has done a lot of work to make Leo look guilty. But ultimately, it will be his fiancé Nancy Miller (Patrika Darbo) who will give Chad DiMera (Billy Flynn) the final clue he needed to put all the pieces together.

Right before Sonny was stabbed in the back, he noticed a scent of vanilla. Chad thought that it was Craig Wesley’s (Kevin Spirtas) cologne but Clyde was also nearby and Nancy confirmed that it was Clyde’s aftershave. Clyde then flashed back to the moment right before he stabbed Sonny. That means that Clyde not only attacked Sonny, but he most likely killed Abigail as well. As Chad lets this sink in, Clyde is preparing to marry Nancy!

DOOL Spoilers – Revenge Is The Name Of The Game!

The search for Abigail’s killer has taken its toll on Chad. Not only has he lost his wife, but his children have lost their mother. Chad is blinded by his anger and will certainly take try to take revenge. That means that a final showdown between Clyde and Chad is coming in the next few days. Will Clyde kill Chad too, or will Chad turn the table on his wife’s killer? It is certain to be close call, but Chad should ultimately end up with the last laugh!

Days of Our Lives Spoilers – Clyde Weston’s Guilt Will Sweep Through Salem!

Clyde has done a good job of pretending to be a reformed criminal. He has managed to convince Nancy to marry him. She will be devastated that she has been duped by another man. Jennifer Devereaux (Cady McLain) has been popping pills to numb the pain of losing her daughter. Perhaps learning the identity of her daughter’s killer will be exactly what Jennifer needs to make a full recovery.

Will Chad kill Clyde for Abigail’s death? How will Nancy react to Clyde’s murderous plan? Will the truth help Jennifer come to terms with Abigail’s death? Anything can happen in Salem so stay tuned to Days of Our Lives streaming every weekday on Peacock. And don’t forget to check back right here regularly for all your Days of Our Lives news, information, and spoilers!