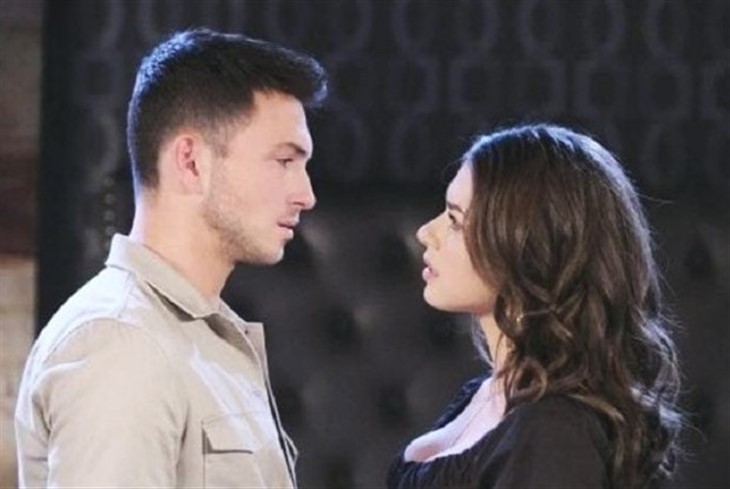 Days of Our Lives spoilers and updates tease that Ben Weston (Robert Scott Wilson) will fight to save Ciara Weston (Victoria Konefal)!  Evan Frears aka Christian Maddox (Brock Kelly) will try to strangle her in an upcoming DOOL episode!

Previous DOOL episodes revealed that AllieDevil Horton (Lindsay Arnold) kidnapped baby Weston right after he was born! Previously, she used Evan Frears to pretend he strangled and killed Ben, but it was really a trick – she changed an unconscious Jake DiMera (Brandon Barash) to look like Ben. That is how she got Ciara to the Horton Cabin; she went into labor with AllieDevil acting as midwife, and Ben found her, but too late to save the baby.

Allie immediately went to parts unknown with the baby, intending a bizarre ritual with a familiar face helping, while at the hospital, Evan tries to strangle Ciara! How far might Ben go to make sure Evan doesn’t kill his wife – he already killed his sister and Ben was framed for it!

DOOL Spoilers – One Would Think Ciara Weston Would Have An Armed Guard!

With Ciara being the daughter of former Salem Police Commissioner Hope Williams Brady (Kristian Alfonso) and sister of Shawn Brady (Brandon Beemer) she’d have an armed guard! Unfortunately, that will not be the case and Evan will make it into the hospital room and try to strangle Ciara with his bare hands! Ben should make it there in time to save Ciara’s life, but will he kill Evan or just disable him and call the police? Andre DiMera (Thaao Penghlis) tried his best to get Ben to kill Johnny DiMera (Carson Boatman) when they were in the DiMera crypt, but Ben refused, being a changed man. But Ben has additional stress on him now – his baby is missing and Evan helped the devil make it happen; it’s hard to believe Ben won’t at least be tempted.

Days Of Our Lives Spoilers – Will Ben Weston Be Pushed To Kill Evan Frears?

When Ben sees Evan’s hands throttling Ciara’s throat on top of him having killed his sister, framing him, and helping facilitate his baby’s kidnapping will it be too much? Will Ben be pushed over the edge and end Evan for good, or will Ciara’s love constrain him; her love has been his motivation not to kill. But even during the months she was missing and presumed dead he didn’t kill anyone, although he most certainly may have been tempted to kill her kidnapper!

But the fact that he didn’t kill Allan Rhodes (Jason Downs) who kept Ciara in that glass prison for months proves Ben has changed. Rhodes did meet his end with a bullet in his back – but not by Ben; ironically, it was fired by Evan Frears!

It seems obvious that Ben would not kill unless it was in self-defense or in defense of another; Ben would only kill Evan if there was no other choice! Putting his hands or an IV line or electrical cord around Evan’s neck would guarantee Evan’s hands would come off Ciara’s, because it would be a reflex to save his own life! Even then Ben wouldn’t do a full strangulation; he’d just do it long enough to get Evan away from Ciara and then overpower him! Ben will do whatever he has to in order to save his wife’s life so they can try to find their baby and save his!