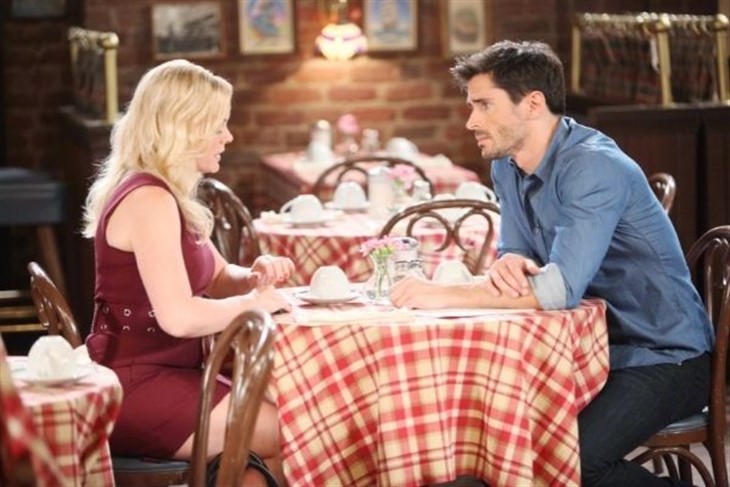 Days of Our Lives spoilers and updates tease that Belle Brady (Martha Madison) will soon serve Shawn Brady (Brandon Beemer) with separation papers! This will happen in an upcoming episode of DOOL after he and Jan- Spears (Heather Lindell) are caught in a clinch!

Days Of Our Lives Spoilers – The Last Straw

It is the last straw for frustrated Belle when she and EJ DiMera (Dan Feurreriegel) come to her house to find her husband with Jan’s hooks into him! Belle can see that it has nothing to do with Shawn being the father of Jan’s baby, and he’s falling for her lies; Jan is taking full advantage to steal him! EJ told her that day that he saw the same thing and it wasn’t all in Belle’s imagination, Shawn seemed to be into Jan!

This hussy has been trying to steal Shawn away from Belle for years, and he’s being dumb enough to let her, and Belle is fed up! Belle is angry and betrayed and frustrated, and more than anything else, she’s weary of fighting a battle she can’t win, and she’s ready to give up!

According to Days of Our Lives spoilers, Belle is frustrated and ready to let the two of them have each other, and move on from this untenable situation, and ponders whether to file for divorce or separation. She opts for separation – as a last ditch effort to knock some sense into Shawn, but clearly she thinks it won’t work.

Things between Jan and Shawn and baby makes three have simply gone too far or he wouldn’t have let her spin her web and entrap him in a relationship. True, Belle didn’t light into Shawn or Jan right then and there, with EJ by her side but he was the one who rushed her away. Separation papers will let Shawn know that she means business but it seems he’s so attached to the idea of a baby it won’t make any difference!

Days Of Our Lives Spoilers – EJ DiMera Thinks Belle Brady Should Kick Him To The Curb!

EJ has his own take on the situation – he thinks Belle should just kick Shawn to the curb! He can understand it would be embarrassing to admit he’d been fooled by the doppelganger and even more embarrassing to admit they had sex! Belle understands that the devil was behind the whole thing when her mother Marlena Evans (Deidre Hall) was still possessed but Shawn wasn’t possessed!

Belle still can’t understand even though the devil helped Jan morph into a spitting image of herself why Shawn couldn’t tell the difference! EJ reminds her neither he nor anyone else including herself could tell the difference when his son Johnny DiMera (Carson Boatman) was possessed, either!

DOOL Spoilers – The Separation Papers Are Filed, Now We Wait

Belle draws up the separation papers between her and Shawn citing “irreconcilable differences” because she and he will never agree on the problem of Jan and the baby. She waits to see what happens after the papers are served, to see if the shock and the bolt from the blue gives him a wake-up call or not. She is having them served to him at work, at the Salem Police Department to ensure that Jan doesn’t forge his signature on them. That way she will know if there’s any hope for them or not, although she’s pretty much given up!