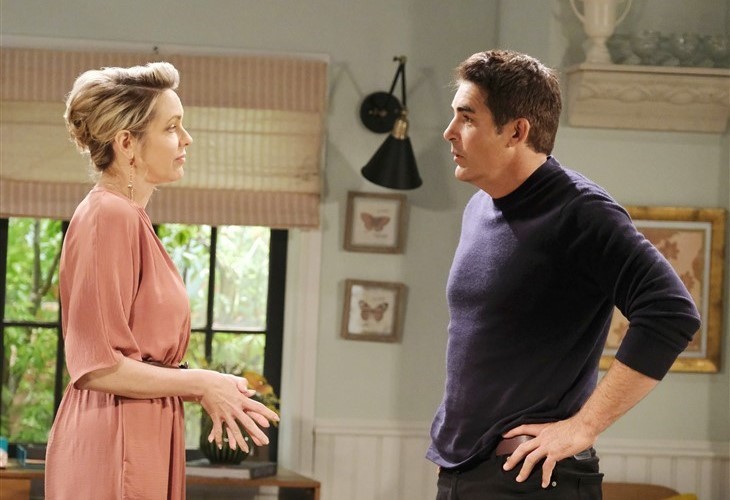 Days of Our Lives (DOOL) spoilers and updates tease that Nicole Walker (Arianne Zucker) will receive a big surprise from Rafe Hernandez (Galen Gering) in an upcoming DOOL episode!

Days Of Our Lives Spoilers – Rafe Hernandez Has A Surprise

Nicole wonders if Rafe is maybe rushing into things a bit although she’s pleasantly surprised when he gives her a diamond engagement ring! He’s been barely broken up with Ava Vitali (Tamara Braun) although it has been a few months Nicole is not so sure it is something they should rush into. Rafe has a different opinion, however, feeling like since Ava is not between them anymore it’s time to take that next important step.

However, knowing that Eric Brady (Greg Vaughan) is back in Salem makes Rafe wonder if Eric is the real reason for Nicole’s hesitation to say “yes” to his proposal. Nicole insists that isn’t the reason when he asks her, but she does wonder if insecurity about Eric is making Rafe rush things!

Eric was all ready to return to Africa and his priestly mission there when he got an unwelcome surprise – Roman Brady (Josh Taylor) and Kate Roberts (Lauren Koslow) are shocked! Eric tells them that the diocese informed him he has been expelled from the priesthood for unauthorized exorcisms – he’d had no idea he needed permission! Those were exorcisms he performed on his family members, his mother Marlena Evans (Deidre Hall) and his niece, Allie Horton (Lindsay Arnold). Kate assumes he can now reunite with Nicole, but Eric says she’s moved on with Rafe and he won’t interfere with her happiness. Eric finds himself staying in Salem after all, but it’s not because of anything he’d planned!

Nicole explains that while she does have residual feelings for Eric, she also knows it is not right for them to be together, and it’s nothing to do with priesthood! Eric had forgiven her for her past fling with Xander Cook (Paul Telfer) and had wanted to work things out and she was the one who said no. After all the years of trying to make a relationship work that was always interrupted, she’d realized that they weren’t right for each other.

Nicole has a beautiful relationship with Rafe and she doesn’t want to lose him even though she seems hesitant and Rafe seems to be in a rush. She asks him again, explaining she wants to make sure, that he’s not proposing because he’s worried about her going back to Eric.

DOOL Spoilers – Rafe Hernandez Bought The Ring A While Ago

Rafe explains that he actually had bought the ring quite a while ago, and he is genuine in wanting to marry Nicole! But then, when she suddenly seems impulsive with her yes answer, he almost takes back his proposal! Now he wants to make sure that she is sure, and she tells him she is absolutely sure, she a hesitancy in him so she wanted to be clear! Now that both are completely on the same page, Nicole knows she has to tell Eric herself – she doesn’t want him to hear it from anyone else first. So she goes to him and tells Eric about her new engagement to Rafe, wanting to get it off his chest.