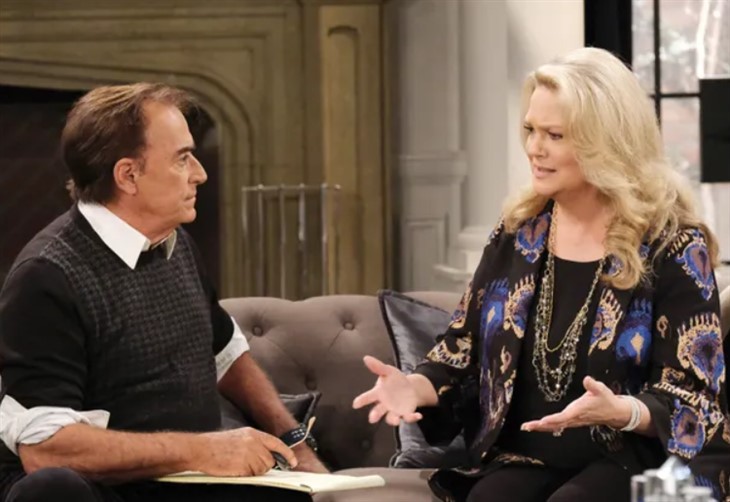 Days of Our Lives spoilers reveal that Tony DiMera (Thaao Penghlis) is disgusted with Anna DiMera’s (Leann Hunley) behavior. Even though Tony understands Anna’s difficulty with Sarah Horton (Linsey Godfrey), it’s not really Renee DuMonde they are dealing with. It’s Sarah’s mental illness. Anna’s attitude is pushing Tony away and he just might get closer to Sarah.

DOOL spoilers reveal that Sarah has returned to Salem but not as herself. Sarah is suffering from the delusion that she is Renee. Even though everyone has told Sarah repeatedly that she isn’t Renee, she doesn’t believe it. Not only that, but Sarah believes that she is in love with Tony and is determined to get rid of Anna.

Maggie Horton Kiriakis (Suzanne Rogers) had Sarah committed to the hospital. When Sarah was dragged away, Tony and Anna got into an argument. Tony was disgusted with the cruel way Anna was handling the situation.

Even though Anna has every reason to hate Renee, she seems to be forgetting something. Sarah is suffering from a delusion and isn’t Renee. Tony thought that Anna could have handled the situation with a bit more empathy and understanding. Instead, Anna was gleefully laughing at the pain Sarah was in and making snide little comments.

Days Of Our Lives Spoilers – Tony DiMera Moves Out

Days of Our Lives spoilers reveal that Tony lost his appetite and wouldn’t even eat lunch with Anna after that. In upcoming episodes, Tony will make a shocking move. When Tony is asked to move into the Kiriakis mansion to live with Sarah, Anna is stunned. Anna doesn’t think it’s going to happen. However, it is confirmed that during the week of March 28, Tony gets settled into his temporary new home at the Kiriakis mansion.

Tony knows that he needs to be careful in how he deals with Sarah. As Penghlis stated in an interview with Soap Opera Digest, people with delusions can be dangerous. At the same time, Tony might start bonding with “Renee.” Of course, Tony would never do anything inappropriate – at least, we hope not.

At the same time, Anna seems to be pushing Tony away without realizing it. Once Tony is in the same house as Sarah, the two could end up bonding. It doesn’t mean they will get romantic. However, Tony could want some questions answered and since Sarah’s memories are tied to Renee’s personal thoughts in the diary, some interesting revelations could be revealed.

How will Anna deal with this and what does it mean for Tony’s future? Share your thoughts about this storyline and remember to keep watching the NBC soap to see what happens next.