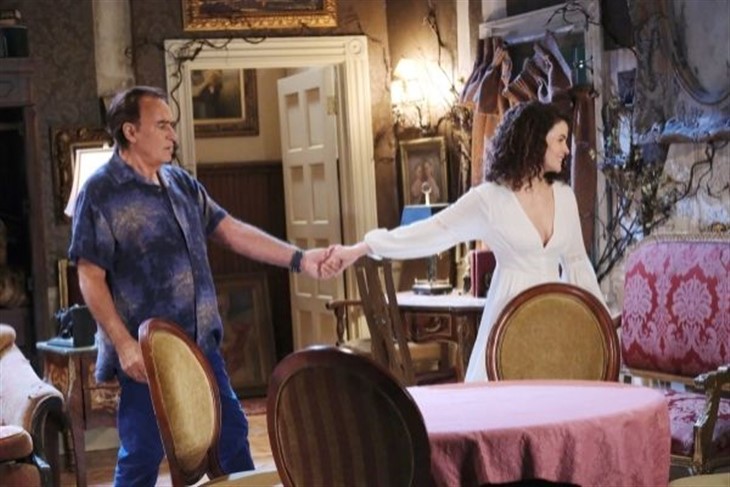 Days of Our Lives (DOOL) spoilers for Thursday, March 3, 2022, reveal Tony not knowing what to do with a woman who looks like Sarah but claims to be someone else.

If you were watching DOOL in 1982, who can forget Tony DiMera (Thaao Penghlis) learning Stefano DiMera (Joseph Mascolo) wasn’t his father after all and rushing to stop Renee DiMera (Philece Sampler) from marrying David Banning (then played by Greg Marx), the man known as Eli Grant’s (Lamon Archey) dad and Julie Williams’ (Susan Seaforth Hayes) son who is now dead. Tony was too late, but by 1983, he and Renee finally slept together and then she was killed by his lookalike cousin, Andre. In the ensuing decades, the soap has gone back and forth as to whether Tony is a real DiMera or not, so he may or may not have slept with his sister.

And now Sarah Horton (Linsey Godfrey) is convinced she is Renee and is thrilled to see her beloved Tony on the island. He finally found her and they can be together now. Tony doesn’t quite know what to do with this delusional woman who claims to be in love with him, but wait until she finds out he is still with Anna Fredericks (Leann Hunley).

This is going to be a difficult time for Tony and Anna, but at least Renee is happy. But how will Sarah’s family feel about this? Xander Kiriakis (Paul Telfer) is going to have a lot to say about this because this is beyond a Dr. Rolf (Will Utay) mask or microchip with someone’s essence.

At least Abigail (Marci Miller) and Chad DiMera (Billy Flynn) are finally reunited. He used his instincts and found his wife — kidnapped by his sister, of course. Does Kristen DiMera (Stacy Haiduk) manage to make a great escape when the plane arrives? She always has a way of making herself scarce and getting where she needs to go whenever the going gets tough. And somehow she always winds up in Salem and at the police station. Will that happen this time?

But instead of thinking about Kristen, let’s just enjoy the Chabby reunion before something really, really bad happens. Stay tuned to Days of Our Lives weekdays to see how these stories play out.

The Bold And The Beautiful (B&B) Spoilers: Sheila’s About To Blow Her Cover