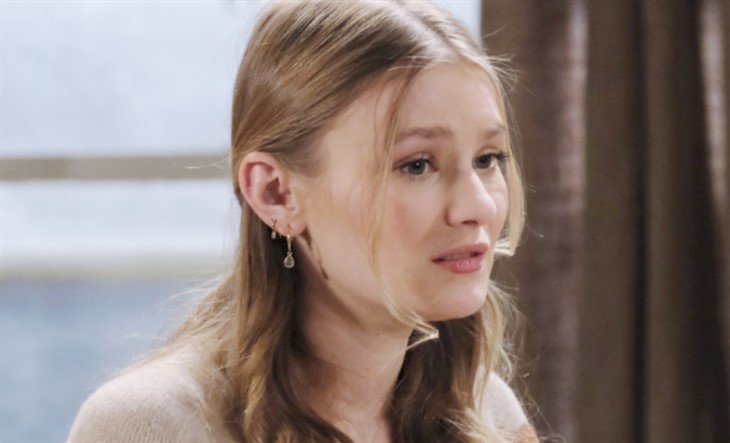 Days of Our Lives spoilers reveal that Sami DiMera (Alison Sweeney) and Eric Brady (Greg Vaughan) had “twin radar” when they were younger. Could that also happen to Allie Horton (Lindsay Arnold)? If so, Allie could be the one to save Chanel Dupree (Raven Bowens) and alert her grandparents that Johnny DiMera (Carson Boatman) is possessed by the devil.

Days Of Our Lives Spoilers – Twin Radar Used In the Past

DOOL spoilers reveal that when Sami and Eric were younger, they had what the soap referred to as “twin radar.” Even though Allie and Johnny are twins, they seem to be at odds all the time. Despite their differences and competition over Chanel, Allie could end up sensing that Johnny is literally not himself.

Johnny was revealed as being the next Salemite possessed on New Year’s Eve. Instead of joining Chanel for the festivities, “Jo-Devil” was busy staring at himself in the mirror. Chanel did go to check on him, but “Jo-Devil” was able to cover. Allie and Tripp Johnson (Lucas Adams) left shortly after that. So, there wasn’t enough time for Allie to notice something seemed off with her brother.

Days of Our Lives spoilers reveal that Allie and Johnny don’t spend a whole lot of time together. Plus, Allie is busy with her baby boy and working at the bakery, along with her own relationship with Tripp. However, it is confirmed that Johnny will end up breaking Chanel’s heart. This sends Chanel running straight to Allie.

Even though Allie knew this was going to happen, when Chanel tells her BFF about Johnny’s behavior and statements, it might trigger that “twin radar.” Allie knows her brother best and will get the feeling that something is very wrong.

Even though Allie could confront Johnny about Chanel, don’t expect her to fight the devil herself. Allie will probably immediately sense that it’s not Johnny she’s talking to. Allie will act as if everything is just fine and go straight to her grandparents. However, can John Black (Drake Hogestyn) and Marlena Evans (Deidre Hall) save Johnny? Will Eric need to make another visit to Salem to get rid of the devil for good?

What do you think is going to happen when Johnny breaks Chanel’s heart? Will Allie confront Johnny and realize that he’s literally not himself? How will Salem be saved from the devil’s sinister plans? Tell us your predictions and remember to keep watching the NBC soap to find out what happens next.

The Bold And The Beautiful: Matthew Atkinson Gets Personal