Days Of Our Lives: Beyond Salem: Season 2 Episode 1 Recap 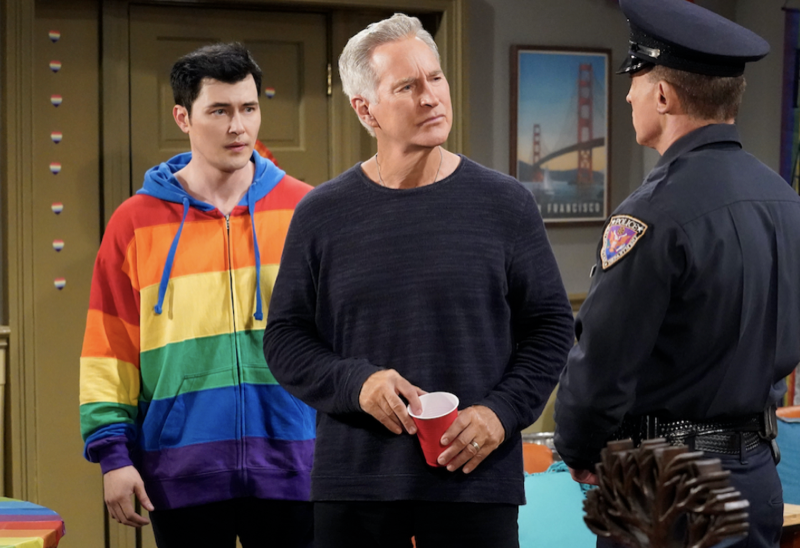 Days of Our Lives: Beyond Salem spoilers tease that things are quickly getting out of hand for many Salem residents and their loved ones. So, let’s take a look! It all started a year ago somewhere in the Mediterranean. Harris Michaels (Steve Burton), a former Salem resident emerges from deep under the ocean. He is there with two other men on a small boat. Harris was looking for something deep under the sea but found nothing. One of the other boaters mentions that a woman named Brady took a boat out the week before. Harris kills both men!

Days of Our Lives: Beyond Salem Spoilers– Ben and Ciara Weston finally reunite with Hope Brady!

Ben Weston (Robert Scott Wilson) and Ciara Weston (Victoria Konefal) have been sailing for the past week on their brand-new boat, Living in Cin! They arrive in Montreal and soon Hope Brady (Kristian Alfonso) arrives to meet. They are all happy to see each other. But soon, Ciara’s anger with her mother becomes apparent. At Hope’s apartment, the two of them argue while Ben tends to Baby Bo. But even as Ciara and Hope reconcile, they are being watched by otherworldly forces!

DOOL: Beyond Salem Spoilers – Bo Brady is in deep water!

From Heaven, Bo Brady (Peter Reckell) is watching a live stream of Ciara and Hope’s reunion. He’s thrilled that his family is coming together. Until Angela (Loretta Divine), his heavenly superior cuts off the feed. It seems that Bo got into quite a bit of hot water for bringing Tripp Johnson (Lucas Adams) back to life a few weeks ago. Bo argued that he wouldn’t let his best friend Steve Johnson (Stephen Nichols) lose his son prematurely the way he lost his. Nonetheless, Bo is cut off from viewing a live feed of his family. Not willing to accept that, Bo rigs the screen so that he can watch again. He knows Hope well enough to tell that she is lying when she tells Ciara that she isn’t involved in anything dangerous. Later, he watches as Hope pulls out a hidden ISA file.

Days of Our Lives: Beyond Salem Spoilers – John Black and Paul Narita reunite in San Francisco!

In San Francisco, John Black (Drake Hogestyn) is having a wild reunion with his son Paul Narita (Christopher Sean), Paul had decided to throw an over-the-top Pride Party and John is at the center of it all. After the party ends, Paul and John clean up. Soon after, Harris shows up disguised as a police officer. He originally says he is there because of a noise complaint but John wonders if something else is going on. Harris knocks John out with a taser and he and Paul get into a nasty brawl. Paul appears to get the upper hand, but Harris knocks him out as Paul is trying to revive John. By the time Paul wakes up, John is gone. He calls Dr. Marlena Evans (Deidre Hall) and tells her that he will find John and that Shane Donovan (Charles Shaughnessy) is on his way to help. But it isn’t Shane who shows up, it’s his son Andrew Donovan (Colton Little) who is also an ISA agent!

DOOL: Beyond Salem Spoilers: The Johnson Family is all together!

In Seattle, Tripp is watching a ball game when someone knocks on the door. Imagine his surprise when Steve and Kayla Johnson (Mary Beth Evans) show up at the door. Tripp calls for his brother and sister to come to see who’s there. Stephanie Johnson (Abigail Klein) and Joey Johnson (Tanner Stine) soon show up and the family basks in their togetherness. They go site-seeing and then come home for pizza and beer delivery! But Tanner shows up disguised as the delivery driver! When Steve opens his pizza, a small bomb goes off. The entire Johnson family is out like a light. When they wake up, they realize Steve is missing and that Stephanie is seriously injured. Stephanie is taken to the hospital and will make a full recovery but no one knows where Steve is!

Days of Our Lives: Beyond Salem – Who is Harris Michaels?

In a van, Harris has both Steve and John tied up. He makes a call to a mysterious woman who is quite pleased with Harris’ success. Soon he delivers the duo to the woman. She reveals herself as Megan Hathaway (Miranda Wilson), Stefano DiMera’s (Joe Mascolo) long-believed dead daughter. Meanwhile, Harris shows up at Hope’s place and much to Ben and Ciara’s surprise, they begin kissing. From Heaven, Bo is not pleased!

What is Megan after? What kind of game are Hope and Harris playing? Can Bo find a way to come back to Earth? Tune in tomorrow for the next installment of Days of Our Lives: Beyond Salem and in the meantime don’t forget about Salem itself! Anything can happen in Salem so stay tuned to Days of Our Lives airing weekdays on NBC. And don’t forget to check back right here regularly for all your Days of Our Lives news, information, and spoilers!