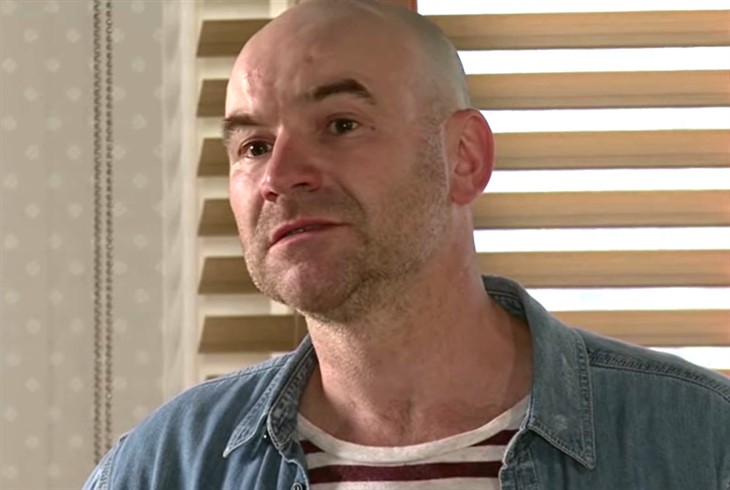 Coronation Street spoilers, news, and updates tease that Tim Metcalfe feels embarrassed with his illness and decides not to see his doctor.

In the previous episodes of “Corrie,” Tim Metcalfe (Joe Duttine) suffered from a heart condition, which he decided to keep a secret from his wife, Sally Metcalfe (Sally Dynevor). When the two had their medical check-up, Sally invited her husband to celebrate with her for receiving good results. However, Tim refused the idea because his doctor advised him to have a triple heart bypass before his heart condition gets worst.

Tim found a friend in Aggie Bailey (Lorna Laidlaw) as he dealt with his heart problem. Sally, on the other hand, believed that her husband has been seeing someone else, but when Tim finally got the courage to tell the truth about his illness, his wife was left devastated. When the time of the operation came, the whole family gathered to show support to Tim, until he got better and finally recovered. However, another medical issue arose when Tim doesn’t want to be intimate with Sally.

In the upcoming Coronation Street episode, every time the couple wants to have a night of intimacy, Sally gets frustrated when her husband keeps on rejecting her. When Tim decides to see Dr. Gaddas, his supportive wife offers to go with him, but the patriarch insists to go to the appointment alone.

However, the father-of-one feels embarrassed by his illness and decides to just hang around outside the medical center until he makes excuses and fails to attend his doctor’s appointment. Later that day, Sally asks about his check-up, and he once again utters another lie as he said that his impotence is just a reaction to his recent triple bypass operation.

As Tim lies to his wife again, will this create another tension between the couple? Will his illness lead to something serious?

During his latest appearance in “Tipping Point: Lucky Stars,” it was seen that Joe Duttine stepped foot in the cobbles before he bagged the role of Tim Metcalfe. Last 2010, he played DS Carr – the officer who arrested Gail Platt (Helen Worth), who was suspected of the murder of her husband, Joe (Reece Dinsdale).

In the year 2018, Duttine found love with Sally Carman, the Weatherfield’s iconic Abi Franklin. Last March 2020, they put their relationship to the next level when Carman agreed to marry the love of her life.

In her exclusive interview with Mirror last year, Sally Carman revealed their wedding plans. “We should have been getting married this December, but we put it to next year because we didn’t know what the score was going to be COVID wise,” she said.

The Bold And The Beautiful Spoilers: Ridge Has To Choose!