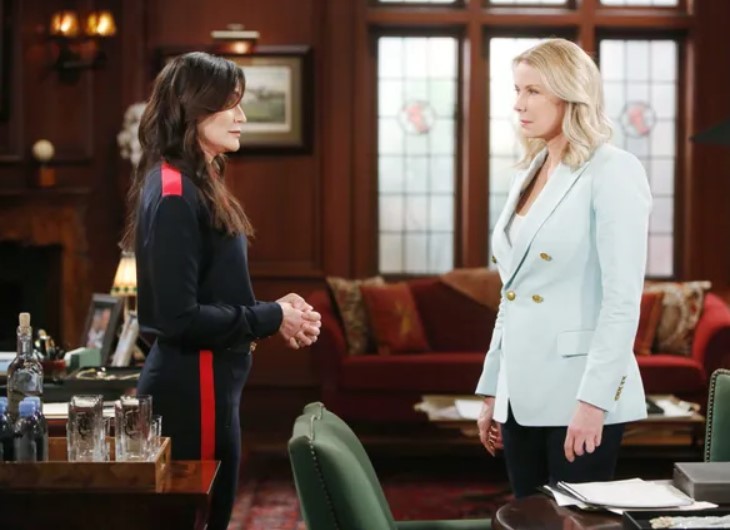 Viewers of The Bold and The Beautiful will recall that Quinn has tried to throw Brooke off the wagon! This was during the time of Brooke and Ridge Forrester’s (Thorsten Kaye) previous separation, and Quinn was trying to get Ridge and her best friend together. Ultimately, Quinn’s scheme to get Ridge married to Shauna Fulton (Denise Richards) backfired because Shauna was honest about it.

According to B&B recaps, Quinn switched Brooke’s non-alcoholic drink with an alcoholic one, but it was only one! Sheila, on the other hand, switches a whole case of faux champagne for real champagne on New Year’s Eve!

Viewers of The Bold and The Beautiful will recall that Brooke raised Sheila’s ire at Il Giardino, after she came by. Brooke was there talking to Deacon Sharpe, (Sean Kanan) who was covering a shift for a co-worker. Viewers of The Bold and The Beautiful will recall they were talking about their Christmases when things went south! Deacon tried to intervene as the two women hurled insults at each other and Sheila pulled a page from Stephanie Forrester’s (Susan Flannery) playbook! Brooke swore Sheila would never see her family again, and she’d make sure of it, and Sheila came up with a revenge plan!

Sheila picks it up and has an epiphany – and vows under her breath that this is how she’s going to make Brooke pay! Sheila orders a delivery of real champagne with the same amount of bottles as the faux ones, and makes sure there are only real champagne bottles!

B&B Spoilers – Drunk As A Skunk, But Who Packed The Champagne Delivery “Trunk”?

The Bold and the Beautiful spoilers tease Deacon and Brooke wind up in bed after a drunken one night stand and wake up together! They will celebrate New Year’s Eve together, not realizing that Sheila had arranged for all the non-alcoholic champagne to be switched with the real thing! Once they do realize what must have happened, they’ll try to figure out who would do such a thing and they each will have their suspicions.

Be sure to catch up on everything happening with Bold right now. Come back here often for The Bold and The Beautiful spoilers, news, and updates.