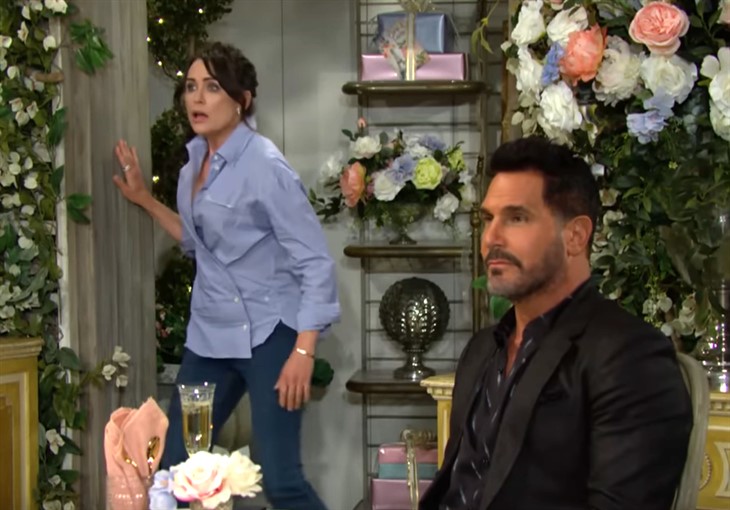 The Bold and the Beautiful (B&B) spoilers for Thursday, June 30, 2022, reveal Carter thinking he is doing the right thing by Eric, but he has no idea what Quinn just discovered.

The Bold And The Beautiful Spoilers – Is It Paris’ Buckingam Dream Come True?

Paris Buckingham (Diamond White) may have claimed she didn’t want to marry Zende Forrester Delon De Metz) or anyone because she was just too young to settle down but then Carter Walton (Lawrence Saint-Victor) proposed so she figured why not — let’s get married,

She has to know that Carter is proposing to her because he wants to forget Quinn Fuller Forrester (Rena Sofer), but she doesn’t care. This is the man she wants and now she is getting him so what could be better, right?

Of course, Paris would be right if she knows that because Carter proposed after Quinn rejected him once again. He even told Ridge Forrester (Thorsten Kaye) that he is madly in love with Quinn but he cannot let Paris open her big mouth and hurt Eric, so he is going to shut her mouth by marrying her.

Little does he know how much Eric Forrester has just hurt Quinn. Carter better hope the ceremony goes slow because Quinn is on her way.

Quinn now knows she has to be with Carter. She’s been fooling herself for nearly a year now thinking her marriage still had a chance and that Eric was loyal to her. Then, she found him in bed with Donna Logan (Jennifer Gareis) and knew the truth right away. Her marriage has been irreparable for a long time and now it’s over and there is nothing she wants more than to get her man — meaning Carter.

However, she is well aware that Carter is about to marry Paris and Quinn just cannot let that happen. So, she hops on a bike and makes her way down the boardwalk to stop this wedding. Carter has made no secret about how much he loves her, so he will stop this nonsense with Paris, right?

She just has to get there on time and make sure he doesn’t do anything completely stupid. Quinn finally knows who the man of her dreams is and she cannot let him get away. Stay tuned to The Bold and the Beautiful weekdays to see how these stories play out.