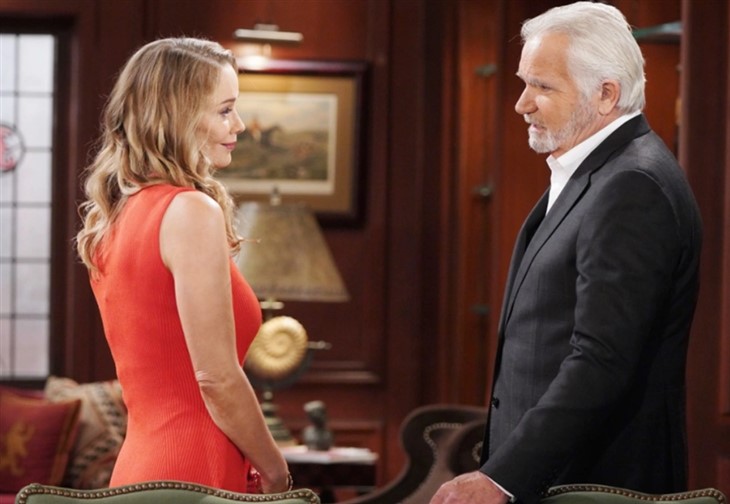 The Bold and The Beautiful spoilers and updates tease that Eric Forrester (John McCook) and Donna Logan (Jennifer Garies) might have a rocky road to marriage! There could be all kinds of complications for the couple in future BOLD episodes!

For one thing, the breakup of Eric and Quinn Forrester (Rena Sofer) was too calm. The old Quinn would have torn into Eric, but then their relationship has devolved from husband and wife to father and daughter! Quinn and Bridget Forrester (Ashley Jones) aren’t all that far apart in age and besides, Quinn has been worried about Eric’s heart and Bridget was along when they discovered the affair.

Still, all there was from Quinn was tears, and Eric didn’t seem to have a lot of compassion for her even though it was obvious she cares. But the thrill is gone for Eric with Quinn, and he can only be sexually functional with Donna; in the soap world, that could mean trouble ahead for Eric and Donna!

B&B Spoilers – The Affair Had Gone On For Weeks, If Not Months

Eric and Donna had been indulging in this steamy affair for weeks, if not months, before they were discovered. In the meantime, Quinn had denied herself her true love and passion with Carter Walton (Lawrence Saint-Victor) for even more months and trying to make it work with Eric. Eric had tried to make things work with Quinn too but couldn’t deny his passion for Donna, and it had been months ago he discovered she still turned him on! When Quinn first discovered this, which was a tame scene of Donna and a honey bear in her desk at work, she tore into her! Plus, Donna was fired in order to put the kibosh on any passion between her and Eric!

When Quinn and Bridget came through the door of the bungalow and discovered Eric and Donna in bed, Donna hid under the covers she was so afraid of Quinn! Perhaps Bridget could have been a calming influence on Quinn or Quinn held herself in because of worries over Eric’s heart. But in the past Quinn would have throttled Donna and they would have had to have been physically separated; instead, Quinn seemed in a quiet shock.

Quinn was indeed shocked – and emotionally shattered, inwardly grieving the two men she’d lost. Eric to Donna, and Carter to Paris Buckingham (Diamond White).  Eric even made the unusual and unsoapy move to encourage Quinn to stop Carter’s wedding to Paris which was beginning around the time they broke up!

B&B Spoilers – The Calm Before The Storm?

Could this just be the calm before the storm, and Eric and Donna be in for trouble not that far down the road, or will they live happily ever after?  And whose happily after is bound to be destroyed, or at least challenged; Eric and Donna’s, Carter and Quinn’s, or perhaps both couples’? Paris isn’t likely to take Carter dumping her at the altar for Quinn very well, and Brooke Forrester (Katherine Kelly Lang) could decide to go after Eric! Donna will tell Brooke about her exciting news, likely of a marriage proposal while Brooke sits home and pines for Ridge Forrester, (Thorsten Kaye) who still hasn’t made sexual moves. Brooke could be very resentful of her sister’s happiness and decide her own is more important – it’s not the first time Brooke has stolen her sisters’ men!