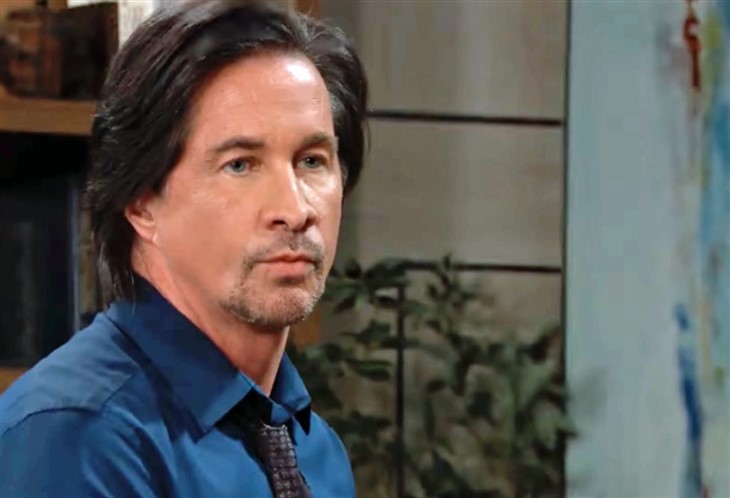 Victor has managed to get his great-nephew out of Pentonville, but he has to be responsible for him for the remainder of his three month stint. Spencer spotted someone unexpected as they entered, but Victor tries to divert his attention.

Victor tells Spencer he thinks something makes all the difference in the world. Perhaps he’s talking about absence making Trina Robinson’s (Tabyana Ali) heart grow fonder as she’s having a hard time not looking at Spencer.

Elizabeth still hasn’t confessed that she is helping Nikolas Cassadine (Marcus Coloma) by nursing a pregnant Esmé who’s locked up in the North Tower of Wyndemere Castle.

However, Finn spotted the bottle of prenatal vitamins when he went looking for Esmé at Wyndemere, although he hasn’t addressed the same vitamins Elizabeth has been holding.

Esmé had ditched her vitamins in an attempt to convince Elizabeth and Nikolas she’d taken them all which Liz didn’t fall for and has some replacements. Finn thinks Nikolas has Esmé and likely suspects the pregnancy, as he says he’s even more convinced he’s on the right track.

At the Port Charles Grill, where Victor and Spencer also are, Rory has a gift for Trina that he says symbolizes his feelings for her. He has just admitted that he loves her, but she’s distracted by Spencer who is sitting with Victor across the room.

Will Trina be able to focus on her date or will she be forced to confront her true feelings for Spencer? Rory has just invited her to his family Christmas and she had accepted the invite.

At Spring Ridge, Heather just delivered a shocking reveal to GH viewers when she went into Ryan Chamberlain’s (Jon Lindstrom) locked cell and called him “lover”!

She apparently wants to relive old times as she muses about him and her together again for the first time in years. It sounds like the mystery of who Esmé’s birth mother may now be revealed, because Heather always gives away her babies, putting them up for adoption.

On the other hand, perhaps Heather was just obsessed with the serial killer and their sexy nights together may have only been her fantasies. Viewers may remember seeing fan letters she sent to him while he was in Pentonville, which he promptly threw away.

Elsewhere, Nina Reeves (Cynthia Watros) tries to make inroads with Josslyn Jacks (Eden McCoy) as she tells her she can take it if Joss can. They must be talking about their mutual relationship to Sonny Corinthos (Maurice Benard), who Josslyn can’t stand.

It’s certainly a tongue-in-cheek expression on Nina’s part as she loves Sonny and being with him, although she wouldn’t like it if she knew he’s invested in his “other business”.

That’s the part Joss doesn’t like as well, so that would be one thing they’d have in common. Josslyn, however doesn’t look super receptive and Nina looks more than just a little snarky.

In his office at Pozzulo’s, Sonny puts Dex Heller (Evan Hofer) on notice, telling him some mistakes are too big to make. He recently learned why Carly Spencer (Laura Wright) had that “secret” meeting with Brick (Stephen A. Smith) that Nina misconstrued as an affair.

Josslyn herself told Sonny that she had helped Dex heal from his wounds following the transport accident in her dorm room, and it wasn’t hard to figure Carly also helped.

Sonny doesn’t want Dex involved in Carly and Josslyn’s world any more than Michael Corinthos (Chad Duell) does, but he may be warning him Heather can ID him as well.

Days of Our Lives Spoilers: Chad Is Confused About His Feelings