B&B Spoilers: Brooke Won’t Back Down – Fights For Ridge 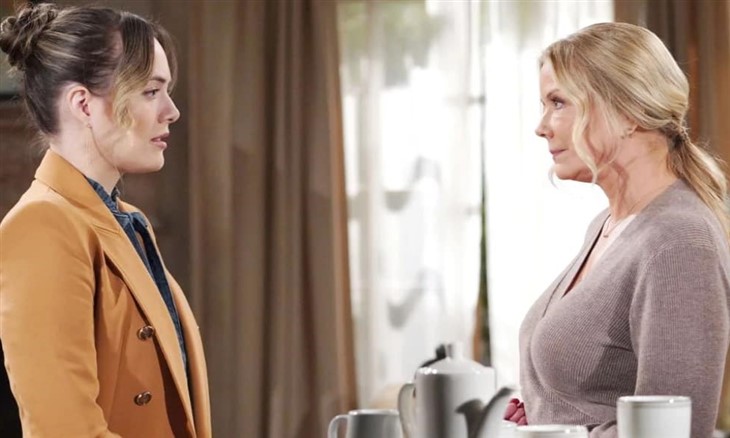 The Bold and the Beautiful spoilers document that Hope Spencer’s (Annika Noelle) support for her mother has not included a push back to Deacon Sharpe (Sean Kanan). While Hope loves Deacon, she recognizes that Brooke Logan Forrester’s (Katherine Kelly Lang) soul mate is Ridge Forrester (Thorsten Kaye).

But Ridge’s perspective was radically altered when Taylor Hayes (Krista Allen) told him what happened between Brooke and Deacon. That reveal was more than shocking. It unmasked Brooke as having withheld information that broke her husband’s trust.

The consequences of what has happened have dramatically impacted Brooke and Ridge’s lives. Lang’s character is arguably unwilling to own responsibility for this stage of the drama she created.

Brooke had a forced conversation with Taylor. But Allen’s character listened to what Brooke had to say during that unscheduled visit.

Lang’s character says that she has owned her mistakes. Yes, Brooke did tell Ridge what happened. But that was many weeks after she repeatedly tried to bury the matter, including telling her and Taylor’s grandson, Douglas Forrester (Henry Samiri), that he should forget about the Christmas Eve event he witnessed after hours at the mansion.

Brooke wants to apply her remaining energy toward the fight to save her marriage. So, that is a leading reason why she wants Taylor to back off, which she does not intend to do.

Deacon has been upfront with Brooke since he returned from prison. He says that she is the one woman he never got over, and he still loves her as much as ever.

Brooke has not been thinking of Deacon since he has been in prison. She also has not been secretly harboring thoughts of cavorting with him behind Ridge’s back.

Instead, Brooke is in an unwinnable position as long as she does not learn about Sheila Carter’s (Kimberlin Brown) role in the night of drinking. As long as that mystery goes unsolved, Brooke will be unable to determine why she felt compelled to drink, with often replayed scenes of her and Deacon fresh in viewers’ minds about what followed.

The Bold And The Beautiful Spoilers – Ridge Forrester Can Not Offer Forgiveness?

Devoted viewers recall that Ridge allowed himself to develop what can be termed a crush on his father’s wife, Quinn Fuller (Rena Sofer). That pair kissed on the beach a handful of years ago, which Brooke witnessed.

Whatever Brooke’s backstory, including the sordid one with Deacon decades ago, Ridge has no room to squawk. Yet, he is basing his choice to split from Brooke on her recent mistakes with Deacon while sidelining the significant influence that alcohol played.

Ridge was not drunk when he kissed Quinn. One could assert that what he did was worse. But he can not find it in his heart to forgive Brooke, as even Deacon asked him to do?