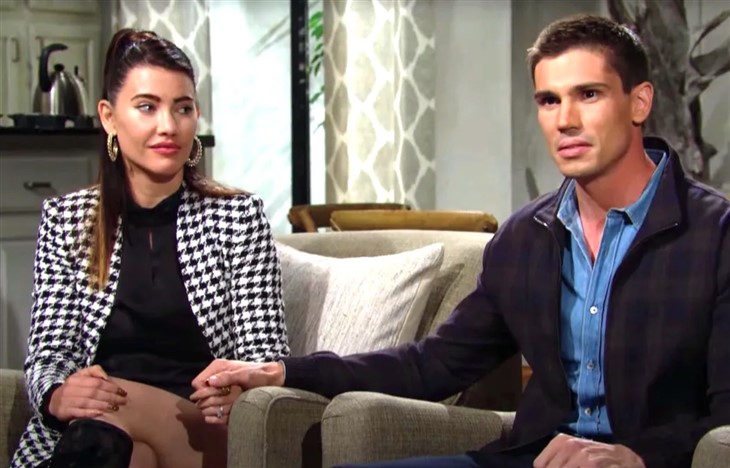 The Bold and the Beautiful (B&B) spoilers reveal that John “Finn” Finnegan (Tanner Novlan) and Steffy Forrester Finnegan (Jacqueline MacInnes Wood) reunite. While they will be overjoyed, it won’t be completely smooth. Steffy needs to confess what happened after her coma. How will Finn react to Steffy believing she was still married to Liam Spencer (Scott Clifton)?

The Bold And The Beautiful Spoilers – ‘SINN’ Reunite

B&B spoilers reveal that Finn is going to escape and reunite with Steffy. It won’t come a moment too soon as Steffy needs inpatient care for her grief and depression. Steffy can’t move on from Finn and still senses his presence. Steffy thinks it’s her profound grief and the trauma Sheila Carter (Kimberlin Brown) inflicted on her.

However, when Finn gets to Monte Carlo, Steffy will realize the truth. Steffy’s strange feelings were her connection to Finn. Then, everything will suddenly make sense, including that alarmed feeling when Finn’s heart stopped.

Head writer and executive producer Bradley Bell previously told Soap Opera Digest that Finn and Steffy would have a very romantic summer. So, expect lots of romantic scenes in Europe. With that being said, no relationship is without conflict. So, could there be some complications when “SINN” reunite.

The Bold And The Beautiful Spoilers – Steffy Forrester Finnegan’s Confession

The Bold and the Beautiful spoilers reveal that at some point, Finn will ask Steffy about what happened after the shooting. Steffy will explain that she was in a coma but eventually woke up. Steffy might also have to tell Finn that she had partial amnesia and didn’t remember him or Hayes Forrester Finnegan (Piper Harriot).

Steffy knows that secrets come out and has learned to just be honest with Finn, no matter how painful. So, she could tell Finn that mentally, she was not able to accept his death. To cope with the trauma, her mind blocked out all memories of Finn. That led to Steffy still believing she was happily married to Liam.

From a medical standpoint, Finn will understand that Steffy’s mind was protecting her from the trauma. However, on a personal level, Finn might worry. After all, Steffy didn’t think she was divorced and single. Steffy went back to thinking she was happy with Liam.

So, Finn might be concerned that subconsciously, Steffy thinks Liam is her true soulmate. Finn will try to get over this, but the fact that Steffy slept with Liam after they got together won’t help.

So, expect Finn and Steffy to navigate this issue. It might take some time for Finn to get over Steffy’s marriage confusion, but let’s hope “SINN” fans will be happy with the outcome.

Sister Wives Spoilers: Where Did Kody Brown Go During His Social Media Hiatus?