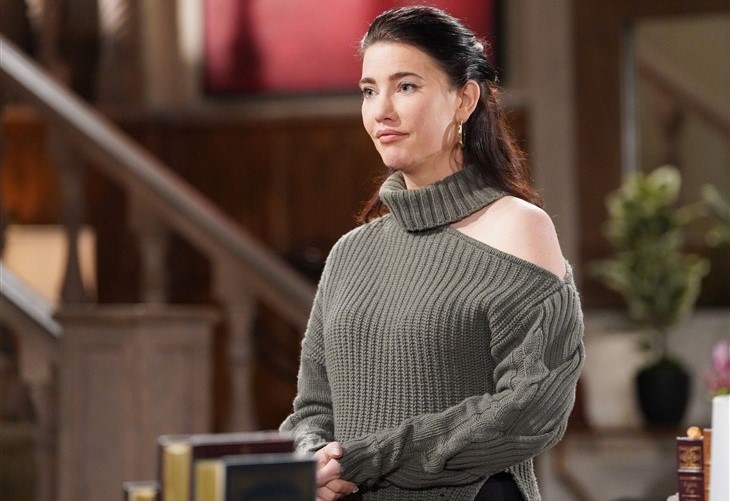 The Bold and the Beautiful spoilers reveal that Steffy Forrester Finnegan (Jacqueline MacInnes Wood) considers Sheila Carter (Kimberlin Brown) to be a dangerous threat. Steffy thinks she has nothing in common with her mother-in-law. However, Tanner Novlan (John “Finn” Finnegan) explained during an interview that Steffy and Sheila are alike in many ways.

The Bold And The Beautiful Spoilers – Sheila Carter’s Crimes

B&B spoilers reveal that over the years, Sheila has committed countless crimes and masterminded many schemes. When Sheila shows up, everyone knows that there is trouble and danger ahead. Sheila claims she is a changed woman and is trying to be better. However, she has also said that before. So, it’s understandable why people have a hard time trusting her, especially considering what she has done to the Forrester family.

When Sheila showed up and claimed to be Finn’s biological mother, it was quite the scene. Sheila kept insisting that she didn’t want to cause any problems and only wanted to get to know her son. Sheila kept pushing her way into Finn and Steffy’s lives.

While Finn was conflicted because he always had questions about his biological mother, Steffy wasn’t going to give Sheila a chance to destroy their lives. It resulted in many face-offs between the women.

The Bold And The Beautiful Spoilers – John Finnegan’s Assurance

The Bold and the Beautiful spoilers reveal that Novlan spoke to Soap Opera Digest about Finn and Sheila. During the week of March 21, Finn visits Sheila and gives her hope that they can have a real relationship in the future.

Finn really wants to be sure that Sheila’s changed for the better. Plus, Finn needs to tread carefully because of Steffy’s feelings regarding Sheila. Finn hopes that Steffy’s wounds will heal with time and one day, they can be a big, happy family.

Novlan made an interesting statement in his interview with SOD. The actor explained that Steffy and Sheila really aren’t that much different.

“He really wants her to stick with the program and be on board with the best way to mend the families. He’s always nervous about overstepping with Steffy, which doesn’t take much. She’s actually a lot like Sheila in a way, as she always wants what is best for her family, and Finn is just trying to tell each of them to stay at bay and let’s let this organically happen.”

It is teased that Steffy makes a discovery, which could be the truth about Brooke Logan Forrester’s (Katherine Kelly Lang) relapse. However, instead of telling the truth, could Steffy want her parents back together so badly that she actually joins forces with the woman she considers so dangerous?