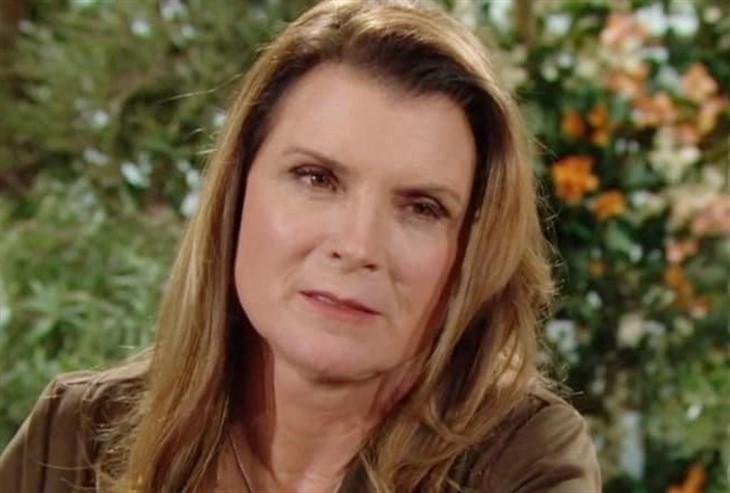 The Bold and the Beautiful spoilers document that Sheila Carter (Kimberlin Brown) is teased to be stunned by her son’s unexpected offer. John Finn Finnegan (Tanner Novlan) has allowed time to pass and has concluded that he will take a chance on contact with his birth mother.

How much and in what forms are yet to be seen on B&B. But regardless of what Finn says or how Sheila responds, and no matter how smoothly it proceeds, the fans know that her recent misdeed and misstep will doom her.

The Bold And The Beautiful Spoilers – Sheila Carter Miscalculated

Why did Sheila think Brooke Logan Forrester (Katherine Kelly Lang) was going to have a difference-making influence with Finn? Steffy Forrester Finnegan (Jacqueline MacInnes Wood) despises Sheila, but she is not a Brooke fan.

Plus, Sheila believes she has Taylor Hayes (Krista Allen) in her corner. Taylor influences Steffy and Finn, as the Christmas Eve invite confirmed.

Sheila’s lack of personal discipline, when so quickly retaliating against Brooke, can not be undone. She will have no plausible explanation for acting as she did when the truth is forced out.

Sheila was the victim in the scene where Brooke verbally humiliated her in front of Deacon Sharpe (Sean Kanan) at Il Giardino. Brooke’s arrogance reinforced Sheila’s feelings and struck her most vulnerable area, the fledgling connection to Finn.

But Sheila made two mistakes in lashing back at Brooke. The first was choosing to retaliate, as her claims to Finn about reform were dashed. The second was saying too much to Thomas Forrester (Matthew Atkinson) about her involvement with Brooke’s sobriety break.

In so doing, Sheila confirmed that her dark side is still very much alive.

Sheila has effectively destroyed Brooke’s life. She caused Brooke to drink, which led to the ill-fated night with Deacon.

Taylor suspects that Sheila’s repeated comments about Brooke are not coming from a good place. So, Allen’s character will be shocked when the reveal happens but not fully surprised.

Now, Finn stands to offer his mother the reward of patience and good intentions. But he is destined to be burned whenever Sheila is revealed to have purposely damaged Brooke’s life.

Instead of making steady progress toward a hoped-for permanent relationship with Finn, Sheila appears destined for a short-term gain in this version of Los Angeles, California.

My Big Fat Fabulous Life: Where Is Whitney Way Thore?

Y&R Spoilers: Did Victor Use Michael To Set Up Ashland?