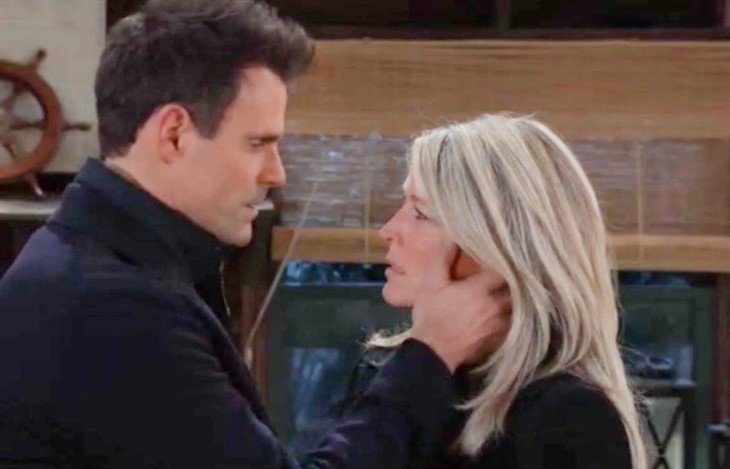 General Hospital Spoilers tease that Carly Corinthos (Laura Wright) is just beginning to adjust to no longer being married to Sonny Corinthos (Maurice Bernard). That means a new romance is just around the corner, and all signs point to Drew Cain (Cameron Mathison) becoming the next object of Carly’s affection. But a Drew/Carly romance will certainly bring a lot of complications, with the first being from Sonny himself!

Sonny and Drew get along for the most part. But it’s no secret that Sonny wishes it was Drew who had died in Greece, instead of his twin brother, Jason Morgan (Steve Burton). Sonny even expressed that very though to Drew a few weeks ago during a drunken outburst at the Savoy.

Watching Carly take up with Drew of all people will surely give Sonny something to say. He’ll likely lash out at both Carly and Drew. And although Sonny slept with Nina Reeves (Cynthia Watros), he will likely still see a Drew/Carly romance as a betrayal of some sort. And he might not be the only one.

When Samantha McCall (Kelly Monaco) was with Jason, Carly was the one person who always seemed to come first for Jason, even before Sam. General Hospital spoilers show Carly and Jason always had a special relationship, and no matter who either of them were with romantically, they always came first for each other. Sam won’t want the same thing to happen with Drew and Carly. She may warn Drew away from Carly, even stating that Carly will only see Drew as a stand-in for Jason. But by then it may be too late.

Drew and Carly almost slept together the night Carly found Sonny in bed with Nina. The stopped before things could go too far, but it’s obvious that the two of them are already on the way to something more than friendship.

They have Jason in common and that might be exactly what keeps them from staying away from each other, despite the warnings of others. It may take the people closest to them awhile to adjust, but Drew and Carly are likely to become the next big thing, despite what anyone says!

Are Drew and Carly headed for romance? Should they? And what will Sam and Sonny have to say about it? Anything can happen in Port Charles so stay tuned to General Hospital airing weekdays on ABC. And don’t forget to check back right here regularly for all your General Hospital news, information and spoilers!

GH Spoilers: Carly And Drew Give In To Passion, New Couple Alert?