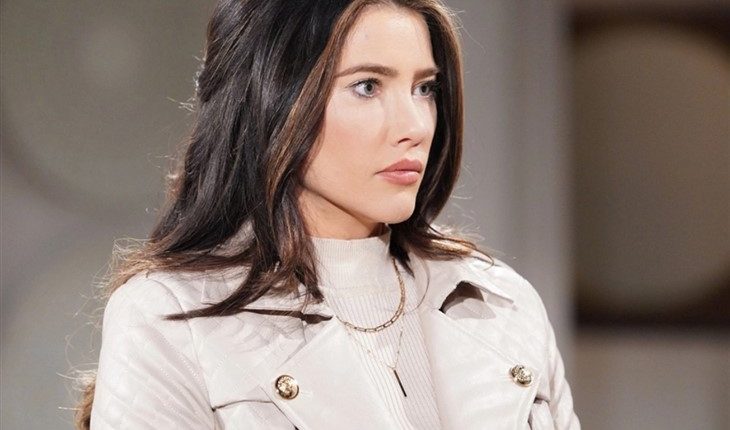 The Bold and the Beautiful (B&B) spoilers for Friday, May 13, 2022, reveal Steffy recalling another shocking thing from the night she was shot and she lost her beloved husband.

The Bold And The Beautiful Spoilers: It’s All Coming Back To Her Now

Steffy Forrester (Jacqueline MacInnes Wood) already remembered the most difficult part of what happened the night John ‘Finn’ Finnegan (Tanner Novlan) died. It was his own mother, Sheila Carter (Kimberlin Brown), who shot him and her and caused that death. She is still reeling from all of it, especially knowing Finn literally stepped in front of a bullet for her and saved her life while losing his.

They even got Sheila right where they wanted her quaking in her boots and walking right into a trap. Still, Steffy has to know why she was even at Il Giordano that night and finally remembers. She was confronting Sheila about New Year’s Eve.

It seems to all come back to a champagne bottle and a faux champagne bottle and what Sheila did to the labels. It was Sheila who made sure Brooke Logan Forrester (Katherine Kelly Lang) got drunk that night and kissed Deacon Sharpe (Sean Kanan). Sheila wanted to blow up Brooke and Ridge Forrester’s (Thorsten Kaye) marriage and she managed to succeed.

While Steffy wanted her parents back together, it wasn’t this way, so when she finally remembers the truth she feels she has to tell Brooke right away.

While Steffy remembers what she learned about New Year’s Eve, Deacon remains in the dark. He has been taken in by Sheila too many times now and still feels Brooke is his destiny. To that end, he has a big theory about Ridge that he needs to share and double down on.

Little does he know how wrong he is and how wrong he has been since he first returned to town and befriended a crazy woman. Deacon is about to be in for a rude awakening, but will he take it all lying down? Has he become a wimp at this point in his life just because he wants to know his wimp of a daughter, Hope Logan Spencer (Annika Noelle)? Stay tuned to The Bold and the Beautiful weekdays to see how these stories play out.