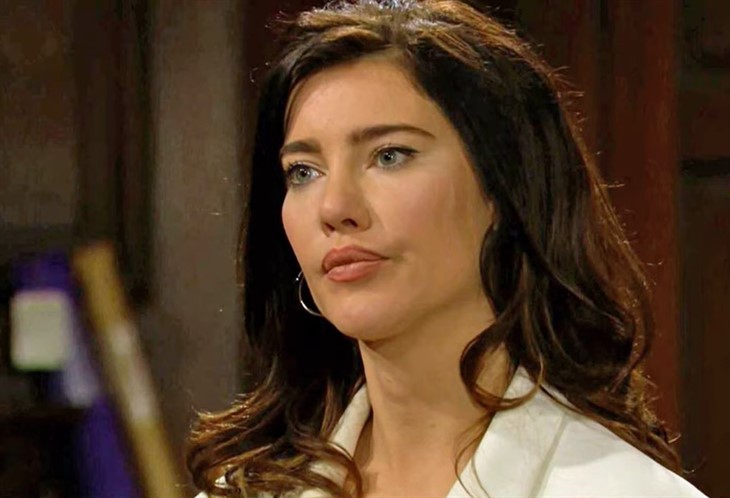 The Bold and the Beautiful (B&B) spoilers tease that a Sheila Carter (Kimberlin Brown) has committed the mother of all crimes, killing her son John “Finn” Finnegan (Tanner Novlan) and wounding his widow Steffy Forrester (Jacqueline MacInnes Wood). There’s no way Ridge Forrester (Thorsten Kaye) and Taylor Hayes (Krista Allen) will let their little girl’s tormentor go unavenged and we have the dish you need to know about Sheila’s comeuppance!

Coming up, spoilers tease that Steffy’s amnesia begins to tug at her brain. She doesn’t realize who shot her and Finn now, but she’s working overtime to figure it out. Thanks to Taylor making Sheila her new bestie, there will be plenty of ops for Steffy to have a realization. Steffy has been nice to Sheila but once she remembers the truth Sheila could be the one in danger.

Explosive B&B spoilers reveal that during the week of May 9-13, Steffy’s memories overwhelm her.

Steffy will recall how she and Finn were in the alley with his demented mom and how he bravely sacrificed his life for hers. This flood of memories will embolden Steffy and her outrage is the catalyst for Steffy and her parents and maybe even Deputy Chief Bradley Baker (Dan Martin) setting a trap for the murderous vixen.

At any rate we can tell you that Steffy will threaten her fragile health as she has yet another heated confrontation with her former MIL. Will it be Liam Spencer (Scott Clifton) who comes to save the day, threatening Lope once again?

The Bold And The Beautiful Spoilers – Steffy Takes The Lead

Steffy’s outrage has her up in Sheila’s face and the evil mom doesn’t stand down—quite the opposite. Steffy will be a force to be reckoned with once she goes down the revenge road armed and dangerous.

But Ridge and Taylor will be part of the spectacular fireworks and this could have repercussions for Bridge and Tidge. Right now Tidge is in the lead in the Ridge derby, but could Bridge win the race by a nose? May Sweeps is a time for epic adventure, sordid shenanigans and spectacular fireworks. We guarantee that whatever happens, Sheila Carter, the mother of all evil, will be at the center of the hell fire!