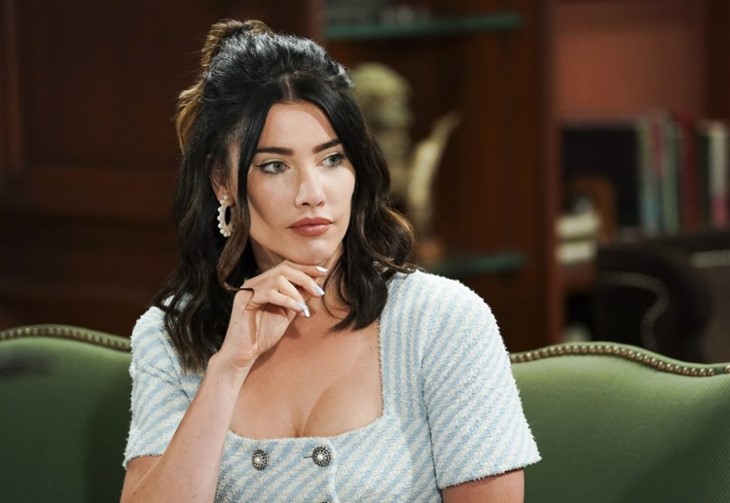 The Bold and the Beautiful spoilers reveal that Steffy Forrester Finnegan (Jacqueline MacInnes Wood) won’t give up until her parents are back together. However, when the truth comes out about Brooke Logan Forrester’s (Katherine Kelly Lang) relapse, Steffy could be betrayed by those closest to her. Will Brooke end up getting two unexpected allies?

The Bold And The Beautiful Spoilers – Steffy Forrester Finnegan’s Fixation

B&B spoilers reveal that Steffy and Thomas Forrester (Matthew Atkinson) have always blamed Brooke for breaking up their family. Even though Thomas has stopped manipulating situations, Steffy has picked up the bad habit.

Steffy is determined to destroy “Bridge,” but not because of Ridge Forrester (Thorsten Kaye) being betrayed. Steffy only cares about her parents getting back together. It doesn’t matter to Steffy whether Ridge or Taylor want that to happen.

Now that Taylor knows about “Beacon,” she is telling Ridge that he’s been betrayed by his wife. Exposing Brooke won’t be enough for Steffy. Determined to reunite “Tridge,” Steffy will pressure Taylor to take advantage of the situation.

Even though Taylor will always love Ridge, she truly just wants him to be happy… even if that’s with Brooke. Plus, Taylor doesn’t want to get hurt again. After all, she stayed away for years because it was too painful to see Ridge and Brooke together. Taylor is finally healing and Steffy trying to force “Tridge” back together could reopen those old wounds.

The Bold And The Beautiful Spoilers – John Finnegan’s Suspicion

The Bold and the Beautiful spoilers reveal that Taylor isn’t the only person getting suspicious of Sheila. John “Finn” Finnegan (Tanner Novlan) received a visit from Sheila, who just happened to mention Sheila.

Even though Sheila covered when Finn asked about it, he will keep that in the back of his mind. So, as evidence starts to mount up that Sheila could have done something to Brooke, Finn could get involved.

Brooke knows that her kiss with Deacon Sharpe (Sean Kanan) only happened because she drank. However, Brooke can’t figure out what caused her to drink in the first place. When the truth about the champagne comes out, Steffy won’t care. There is no way she wants to risk “Bridge” getting back together.

However, John Finn Finnegan And Taylor Hayes Could See Things Differently. Will They Really Betray Steffy Forrester And Help The Enemy?

What do you think is going to happen with Steffy’s vengeful plot? Will Brooke get some unexpected allies when Finn and Taylor learn the truth? How will Steffy take being betrayed by her own mother and husband? We will have to keep watching the CBS soap to find out.

Be sure to catch up on everything happening with B&B right now. Come back often for The Bold and Beautiful spoilers, news, and updates.