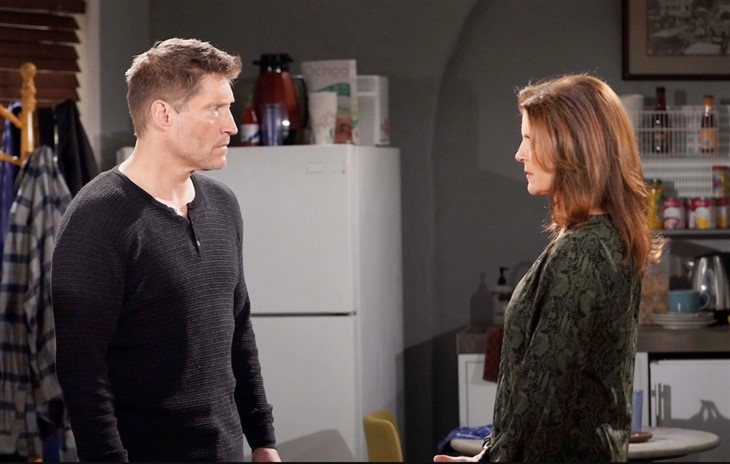 The Bold and the Beautiful (B&B) spoilers tease that Sheila Carter (Kimberlin Brown) and Deacon Sharpe (Sean Kanan) will take sides in the Brooke Logan (Katherine Kelly Lang) and Ridge Forrester (Thorsten Kaye) situation. They both feel passionate about why they think their side is right.

Knowing Deacon and Sheila, the disagreement could get ugly and emotionally charged. Here’s what we know about what’s ahead on the CBS soap opera.

It won’t surprise the B&B fans to know that Deacon will support Brooke in this situation. He has a sweet spot in his heart for the blonde. After he heard of their split, Deacon rushed to Brooke’s side to get on one knee to ask her to be his wife. Of course, she turned him down, but it just showed Deacon’s admiration for Brooke.

If Sheila tries to make this ordeal Brooke’s fault, Deacon will likely shut her down. He will stand up for his daughter, Hope Logan (Annika Noelle), mother, not allowing Sheila to place the blame at her feet. It might not go over well with Sheila, as she seems hellbent on getting what she wants the exact moment she wants it.

With Sheila’s history with Eric Forrester (John McCook), it shouldn’t surprise the B&B viewers that she is on Ridge’s side in this squabble. She battled Brooke for Eric’s attention, so they probably have some hate between them.

Sheila will side with Ridge. She will assume that Brooke made the call to CPS and might even suggest that it sounds like something she might do.

The one thing Sheila doesn’t know about is Deacon’s impulsive proposal to Brooke after Ridge walked out on her. B&B spoilers tease that Deacon wanted to keep that a secret, as he wasn’t sure how Sheila might react.

With Sheila hiding out at his apartment, the last thing he needs is for her to fly off the handle about something that doesn’t matter anymore since Brooke declined his marriage proposal.

It could get interesting over the next few weeks as Sheila and Deacon scenes come up. The wedding drama will be exposed, and the evil villain will definitely have an opinion about why it all went down.

B&B fans, do you think Deacon and Sheila have a chance to become a real couple? This site is a leading source for everything linked to The Bold and the Beautiful. Check back regularly for B&B spoilers and news!