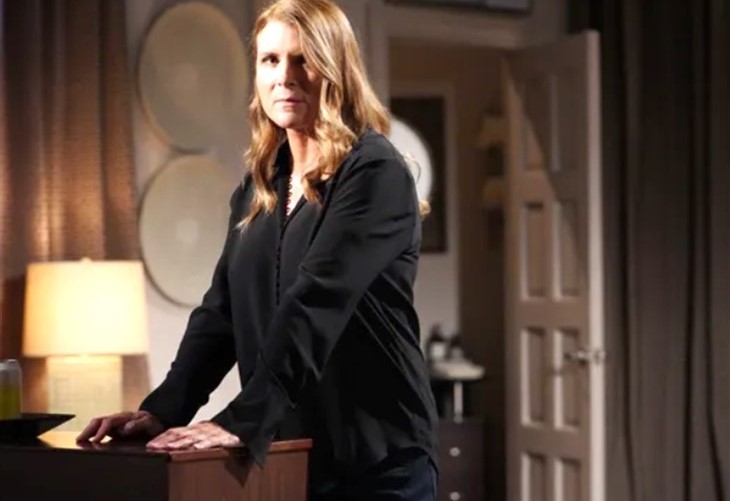 The Bold and the Beautiful (B&B) spoilers document that Sheila Carter (Kimberlin Brown) is realizing revenge against Brooke Logan Forrester (Katherine Kelly Lang). The plot to feed her alcohol is totally diabolical.

But it just so happened that Sheila involved herself in processing that order. The resulting switch was very soapy, furthering the plot and allowing Deacon Sharpe (Sean Kanan) to realize a goal he was striving for on New Year’s Eve.

The Bold And The Beautiful Spoilers – Deacon Sharpe Unable To Leave

Deacon returned to Brooke’s mansion because he forgot his cell phone while playing with his granddaughter, Beth Spencer (Madeline Valdez and River Davidson), during the party Lang’s character held for her reconciled family.

The mistake Deacon made was staying after he retrieved his electronic device. He did not leave. Because Brooke did not know that she was inebriated, she began to do shots of vodka with him.

As an aside, how can he afford a smartphone and what appears to be new clothes? Also, how did he get to Brooke’s? Did he walk from the restaurant where he works and lives?

The old line about what happens in Vegas staying in Vegas can not prove true in this scenario. Rather than Brooke and Deacon being the only people who knew they kissed after drinking, Douglas Forrester (Henri Samiri) became a witness.

Douglas is observant and very social. He saw a man wearing a Santa Claus hat on, likely believing that it was his step-grandfather, Ridge Forrester (Thorsten Kaye).

Ridge was grounded because of his plane’s initial mechanical issues and severe weather. So, Douglas’ sure tell about the matter will help to expose the Brooke-Deacon moment.

The Bold And The Beautiful Spoilers – Meanwhile, At The Cliff House

Sheila realized an unexpected ally when Taylor Hayes (Krista Allen) suggested that Steffy Forrester Finnegan (Jacqueline MacInnes Wood) allow her unwanted mother-in-law to be with them on Christmas Eve at the cliff house. Taylor followed that event and Sheila’s visit to her office by saying she intends to continue watching Brown’s character.

Taylor’s influence and approach mean that Sheila will be allowed to continue having access to John Finn Finnegan (Tanner Novlan) and her grandson unless she screws up. That already happened, but the principles do not know it yet on B&B.