Days Of Our Lives Spoilers: JoDevil Makes Gabi Think Jake Is A Love Cheat, Gets Her In Bed? 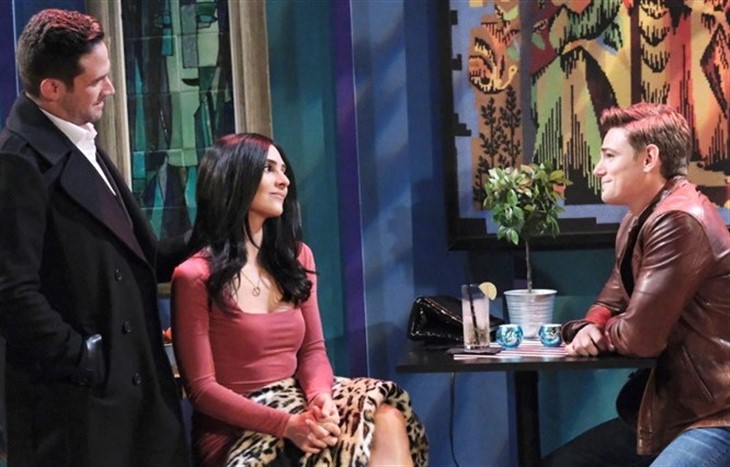 Days of our Lives (DOOL) spoilers tease that nothing is as it seems in Salem. On the NBC sudser, it’s possible for any citizen to mask-a-rade as anyone they choose. This was most recently demonstrated when Ava Vitali (Tamara Braun) put on a Sarah Horton (Linsey Godfrey) mask and fooled Abigail DiMera (Marci Miller) for a while.

In the coming days there will be more double tricks with spoilers teasing that Jake DiMera (Brandon Barash) could two-time Gabi Hernandez DiMera (Camila Banus). Or so it seems—it’s hard to know who is who in Horton Square, what with Johnny DiMera (Carson Boatman) now running around as JoDevil.

Days Of Our Lives Spoilers – JoDevil Gets His Way?

Johnny is laying on the charm hot and heavy with Gabi who has assured Jake she is not interested in the little punk. We hate to say this, but Gabi hasn’t shown the best taste in men, so relenting to Giovanni’s caveman charm isn’t a hard thought to digest.

Plus, Johnny has the power of the devil on his side so expect to see him use it. Explosive show spoilers reveal that in the coming days Johnny will launch a shady plan that could spell the end for Jabi.

Johnny’s plan involves tricking Gabi into being outraged at Jake, perhaps in the worst way possible, that he betrayed her?

Jabi are knee deep in professional hijinks, besides being a couple. JoDevil has his pick of poison, whether to trick Gabi into believing that Jake betrayed her in the boardroom or the bedroom. Either would make Gabi livid.

Days Of Our Lives Spoilers – Jabi Have Takeover Goals

If Jo-Devil decides to go the lusty route, which makes more sense thus making Gabi primed for revenge sex, he could have it look like Jake cheats with his former mob boss Ava Vitali (Tamara Braun) or SIL Abigail DiMera (Marci Miller).

Gabi is tightly wound on the best of days. If she suspects that Jake cheats on her she will hit the roof. It was not that long ago that she went berserk over him and Kate (Lauren Koslow) wrinkling the sheets. Just hide the pacemaker controllers is all we can say!