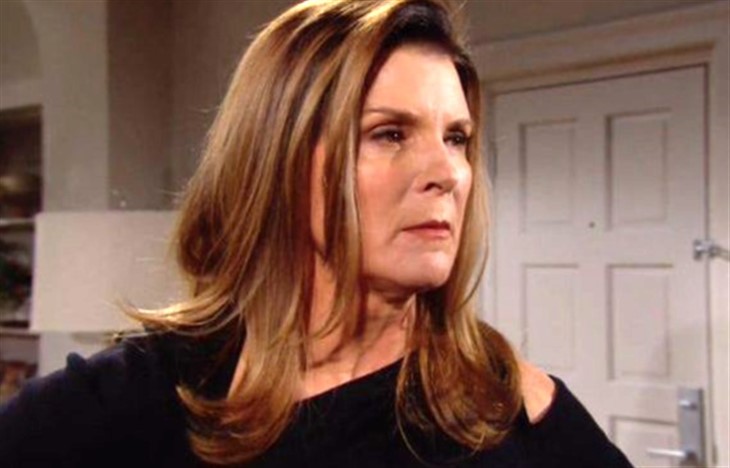 Bold and the Beautiful spoilers document that Sheila Carter (Kimberlin Brown) is said to be dead. Detective Alex Sanchez (Jeremy Ray Valdez) provided photographic evidence of Sheila’s demise and supported his conclusion with DNA evidence that appears to confirm the grisly fate of this villain.

The detective produced Sheila’s middle toe, which was adorned with black toenail polish. Valdez’ character, who was filling in for Deputy Chief Bradley Baker (Dan Martin), who was said to be tied up in court, is certain that Sheila is dead and told the gathered throng at Forrester Creations as much.

The Bold And The Beautiful Spoilers – Ridge Forrester’s Absence Suspicious

Where was Ridge Forrester (Thorsten Kaye)? His absence was suspicious, with Brooke Logan Forrester (Katherine Kelly Lang) saying that Ridge left his phone behind and could not be reached.

The above could be taken as Ridge being connected to the apparent fatal bear attack. Was he involved in orchestrating it?

The writing staff created plausible doubt of Ridge’s actions by not writing him into the group meeting. That, along with a sense of paternal protection, could have driven him to handle Sheila once and for all.

Brooke, speaking for herself and daytime devotees everywhere, responded to the detective’s seeming speculation. She did not initially believe that Sheila was dead.

Brown’s character was tagged as a master manipulator. So, sans a body, why should the Los Angeles Police Department or any of Sheila’s recent victims choose to believe that Sheila is dead?

The implication is that she was eaten by a bear, with her clothing, some hair samples, and the middle toe being all the animal did not finish off.

Production staffs are known for presenting retrospectives when a character is no longer be part of a soap opera’s cast. Fans could take the brief video montage, which included some of Sheila’s top B&B moments, for what it was worth.

It is reasonable to believe that Brown’s character has been written out, for now. Whether TPTB have killed her off is debatable, as it has long been.

Whether Sheila was killed by a bear, faked that scene, as she did the botched robbery behind Il Giardino, was intentionally targeted by an enemy, like Ridge, or survived a real attack and remains a fugitive is an open question.