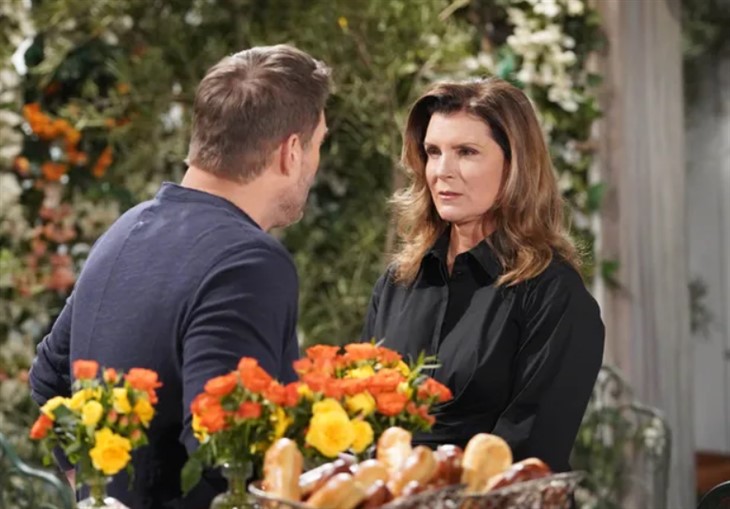 The Bold and The Beautiful spoilers and updates tease that Sheila Carter (Kimberlin Brown) and Deacon Sharpe (Sean Kanan) will have some dysfunctional times ahead. First they’ll take sides in the Brooke Logan (Katherine Kelly Lang) versus Taylor Hayes (Krista Allen) drama and argue, then Deacon will make a threat-might Sheila ditch and run?

The Bold And The Beautiful Spoilers – Pick The Loser

Deacon and Sheila may not know that Ridge Forrester (Thorsten Kaye) and Taylor’s wedding has blown up, but he probably knows about the wedding. If Hope Logan (Annika Noelle) didn’t tell him, no doubt it’s plastered all over the society pages and the news even if it’s a private event. He made a play for Brooke himself but fortunately for him, Sheila doesn’t appear to know; but they do know about the Brooke versus Taylor drama.

B & B Spoilers – Warnings And Threats

The bickering between Deacon and Sheila will ramp up and become more intense, and by the end of the week of November 28, Deacon will make warnings and threats. This could have something to do with Brooke and that Deacon realizes he’s got an edge over Bill Spencer (Don Diamont) now. That means if he’s going to make another play for the newly single Brooke, he’ll have to do something to get rid of his contraband roommate. He’ll make threats and it could be threats of turning her into the police, although she’ll clap back she’ll take him down with her if he does. But maybe he’ll have an out to prevent that, if she’s not too fond of him at that point – find her another place to stay.

The Bold And The Beautiful Spoilers – He Knows An Available Place

Recently, Deacon helped Y & R’s Nikki Newman (Melody Thomas Scott) with some information on Diane Jenkins (Susan Walters). The former Keemo Abbott (Philip Moon) house she bought as Taylor Jensen should still be empty, and it might be the perfect hideout for Sheila. Sheila will have a big reaction to Deacon’s threats, so she might be ready to run but will want to stay in the area.

If Deacon helps her take over Keemo’s old house that should placate Sheila, and she’ll still be close enough to keep an eye on her family. She’ll want to eventually reclaim John “Finn” Finnegan (Tanner Novlan) and Hayes Finnegan (Iliana and Vienna Norris) so that house will be perfect.